From the restrikes, or historical reprints, of posters for classic films and advertisements for circuses and state fairs, to the custom orders printed in the shop today, the products of Hatch Show Print have always been designed and printed by hand in Nashville, Tennessee.

The shop’s enduring design and production approach is a handmade mainstay in a world of digital design. Specializing in limited-runs of posters in which one designer oversees the entire process from start to finish, including the packing and shipping of the posters, Hatch Show Print’s history of commercial printing continues with the commemorative works of art printed in the shop today.

Sharing long-standing relationships with Grand Ole Opry stars and the Ryman Auditorium, among other historic Nashville landmarks, Hatch Show Print’s posters are woven into the fabric of Music City and beyond. The shop’s reach extends as far as the touring musicians who have traveled with their show posters and as far as the music venues throughout the country and internationally that have ordered their prints for upcoming performances. To see a poster from Hatch Show Print is to see the visual history of Nashville, Tennessee, the Southern United States, and the nation as a whole. 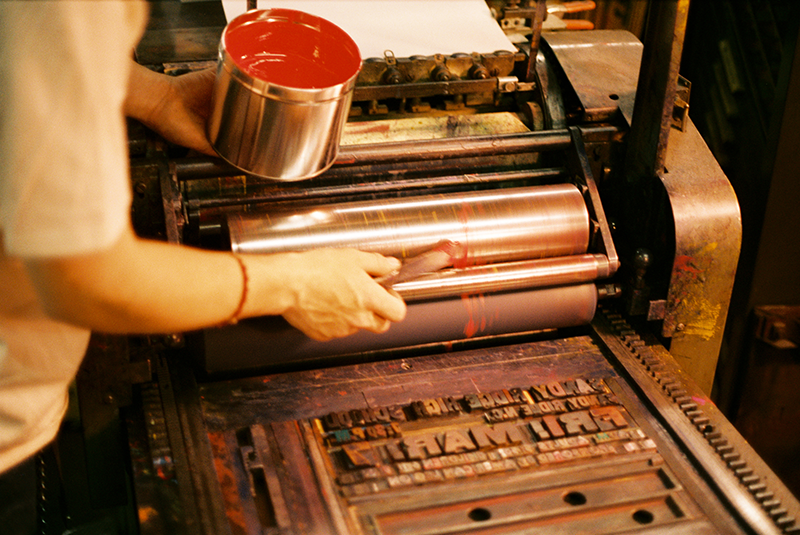 Hatch Show Print prints 500 – 700 different jobs a year, and designs everything printed in the shop. 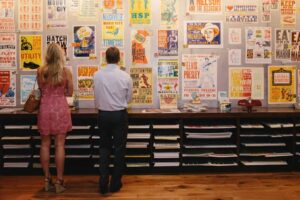 From their very first print job—a handbill announcing the appearance of Rev. Henry Ward Beecher (brother of Harriet Beecher Stowe)—the Hatch brothers got the look right. Here was the simplicity, the effortless balance between type size and style, typeset full-justification—left to right and top to bottom. Here, too, was Southern culture and entertainment, and the beginnings of American history.

The shop flourished, creating posters that covered the sides of buildings and barns in cities and towns throughout the country, creating excitement that sold the shows. Two fonts of extra-large wood type, forty inches and eight inches tall, were cut in the shop to fulfill the needs of producing billboard-size advertisements. Whether it was a circus, minstrel show, vaudeville act, or a carnival, if you wanted to fill seats, an advertisement from Hatch Show Print got the job done.

Impressions from Inside the Print Shop

The golden age of Hatch Show Print was from the mid-1920s through the 1950s. During this time, as Charles’s son William took over the business until his death in 1952, Hatch Show Print captured the magic of country music. William turned his talent as a master woodblock carver to “chiseling and gouging” (as someone once put it) some of the most indelible images of country music performers ever created. To further secure the historic link, the shop’s home from 1925 to 1992 was directly behind the Ryman Auditorium, where in addition to creating posters for country artists, the shop captured the glory of the great African-American jazz and blues entertainers of the day, with posters for artists such as Cab Calloway, Bessie Smith, Duke Ellington, and Louis Armstrong.

Just as eye-catching, “bread and butter” posters filled in the blanks during this time. There were small runs for filling stations, laundries, grocery stores, and movie theaters. This flexibility and openness to all work helped the shop survive the comparatively lean years that followed the death of William Hatch.

The Survival of Hand-pressed 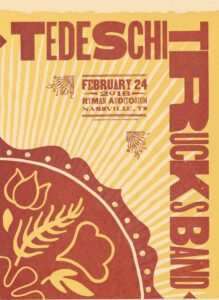 While some letterpress printmakers found it hard to compete with faster offset printmaking, country music and other “old faithfuls” continued purchasing posters from Hatch Show Print, as did newer forms of entertainment, such as all-star wrestling and rock & roll.

From 1992 through 2013, Hatch Show Print could be found on lower Broadway. During this time, as downtown Nashville underwent a revitalization of the city’s center, the shop experienced a transformation of its own, shifting gears to keep up with a renewed demand for posters from artists and venues from around the world. The staff has always been committed to the future, combining twenty-first century sensibilities with eighteenth century technology, designing 500-600 posters annually, as well making artwork for diverse projects such as an art book on photography, food packaging for a UK-based entrepreneur, and lending the shop’s typography to a United States postage stamp design. Additionally, and in some cases in a response to the proliferation of digital design, the shop created artwork for ad agencies and creative directors who desired the look and texture Hatch Show Print.

Eventually, the space on Broadway didn’t afford the room that the shop needed. Fortunately, the Country Music Hall of Fame and Museum embarked on an expansion project that included a new home for Hatch Show Print, at 224 Rep. John Lewis Way South, in four different spaces designed and built to suit the demands and mission of the icon of design, letterpress printing, and history.

Today, over 100,000 annual visitors to 224 Rep. John Lewis Way South experience some aspect of the shop, whether it’s to watch the designer-printers in action or participate in more involved activities somewhere inside the shop. Hatch Show Print looks forward to carrying on the 19th century traditions and practices of the letterpress poster shop it was founded on three generations ago.

Take the tour of Hatch Show Print and learn all about the history of this iconic letterpress poster shop. Listen to the presses run. See the century-and-a-half’s worth of brilliantly colored posters printed for your favorite entertainers. Smell the ink. Handle the tools of the trade to print your own keepsake poster in our print shop-within-a-print shop Universal Music Group Space for Design.

Tours take place daily between 10 am and 4 pm, and last approximately one hour.

We are closed on Thanksgiving, Christmas Eve, and Christmas Day.