Everything Old Is Neon Again 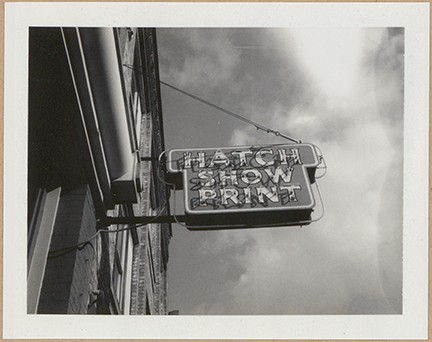 BZZZZT! For some of us, the sound of softly buzzing of neon is as synonymous with this old print shop as the smell of ink and old wood. Since 1948, the shop’s ‘shingle’ has been made of enameled metal and neon, an expense that was made affordable by one singular job the shop produced that year: Campaign posters for Roy Acuff.

He ran for governor in 1948 and though he is, to this day, one of the most renowned artists in country music, his incredible popularity at the time and reputation as a businessman did not translate into votes quite so handily. The democratic process, however, did provide material benefit for Hatch Show Print – out of that first run of tens of thousands of posters, we like to say, Will T. Hatch was able to purchase our neon sign, and install it above the front door on Fourth Avenue. According to what we have found so far in the business records, it looks like the sign was made by Balton and Cummings, installed in late October 1948, and at least one payment in the amount of $227.50 was made to the sign company. In today’s dollars, that equates to about $2400.

Forty-four years later, as the staff at Hatch Show Print and the Country Music Hall of Fame and Museum were moving the shop just one half-block south and one half-block east, onto Broadway, they faced façade restrictions established by the city, as part of their efforts to revitalize Nashville’s downtown. Fortunately, the shop’s history and the city’s good sense prevailed, and the sign hung proudly on Broadway for 21 years, leading the way for the neon and LED parade that has since followed on that street.*

Before the sign was installed, it was given the once-over, including a fresh application of paint. In 2013, as the shop prepared to move into its new home under the same roof with the Country Music Hall of Fame and Museum, the neon sign was brought to Fifth Avenue South and installed right above Hatch Show Print’s Haley Gallery. Its presence on Fifth Avenue, south of Broadway, has aided visitors and attracted the curious. 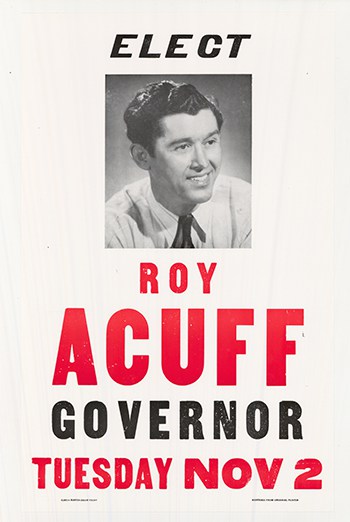 The years since, in the intense summer sun, took their toll on the sign’s paint, and the rain was a constant concern (shorting out the electrical connections to the neon tubing), so late last year, it was time once again for some TLC.

Fortunately, there’s a sign company that’s been around longer than our neon sign, a short ride from Nashville, in Columbia, Tennessee. Columbia Neon Company has been in business since 1934, and not only did they restore our neon sign to make it better than ever, they allowed us to visit their shop on Nashville Highway, and shared their process and history with us. The owner himself, Charles Stofel, showed us around, and we are honored to be able to share this video recorded during our visit.

Take a drive, or even a walk, around Columbia, Tennessee, and if you are paying attention to the signage many of the businesses use to catch your attention, you cannot help but piece together the history of one local business in particular: Columbia Neon Company.

Columbia Neon was established by Patton Whitaker and O.G. Compton in 1934. Whitaker was the signmaker, and Compton designed the signs. Not only did they present the artwork as it would appear during the day, Compton and succeeding artists would draft nighttime views of the signage, to show a client what the sign would look like when it was lit. 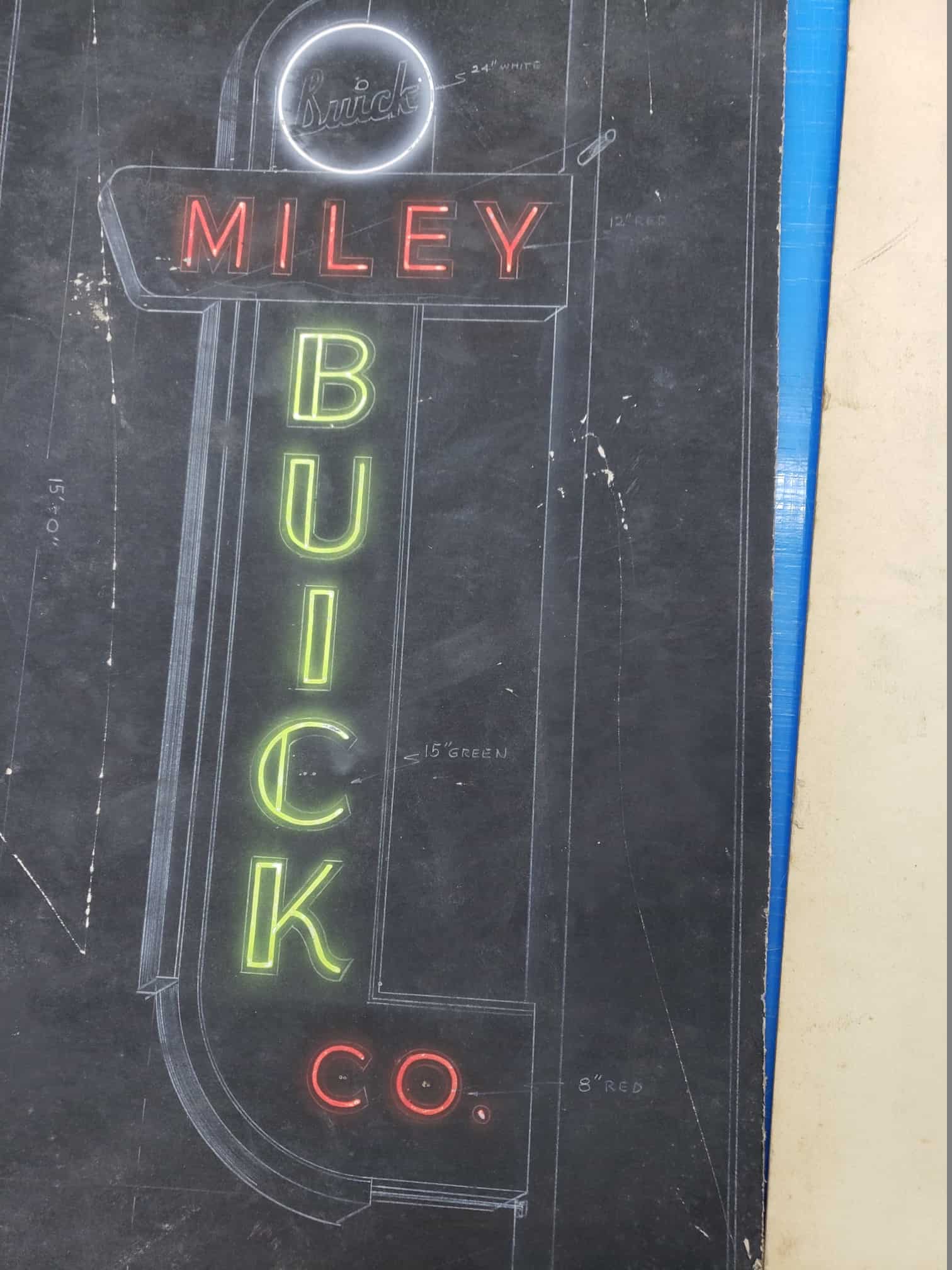 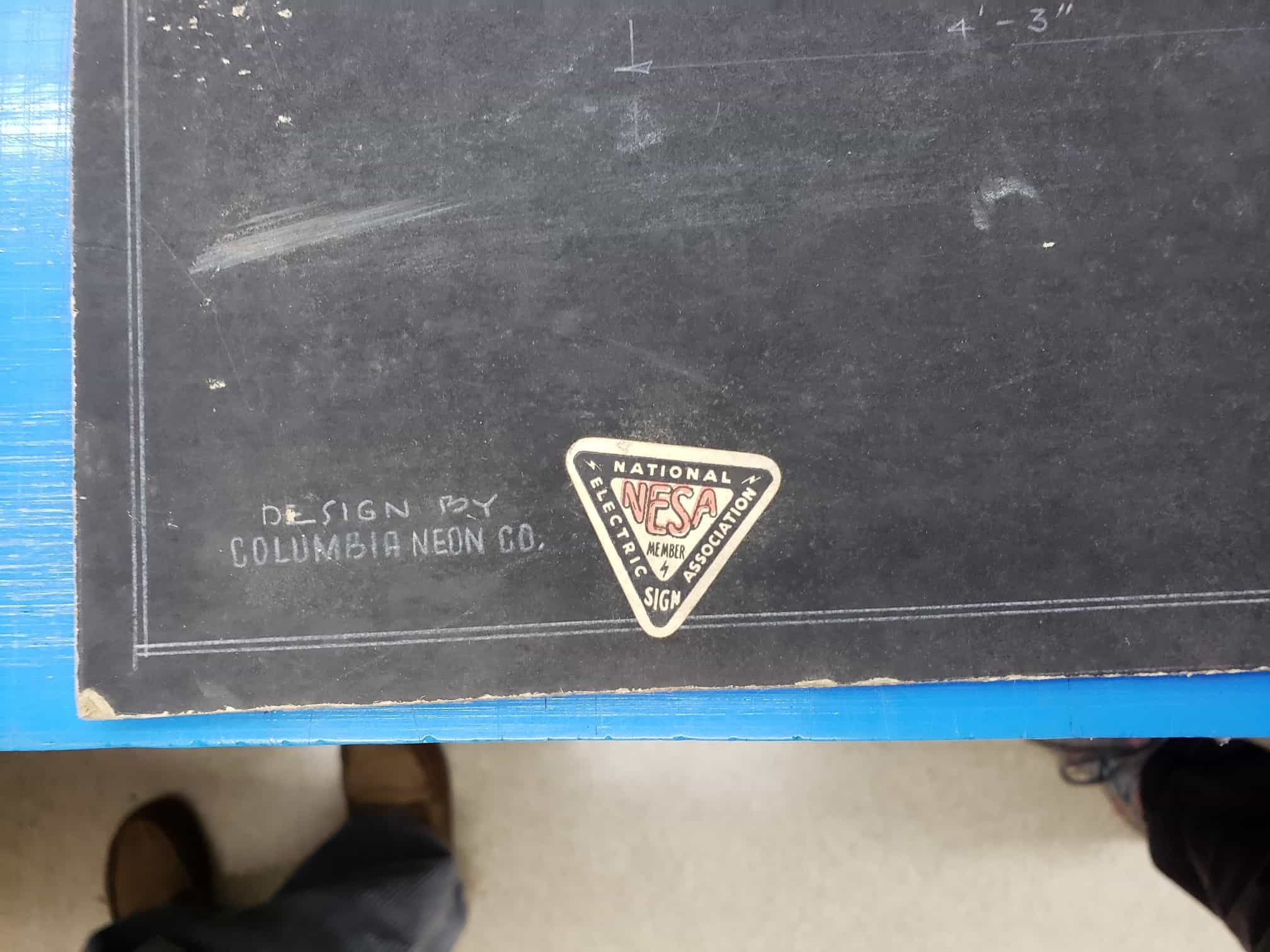 In 1960, a fellow by the name of Charles Stofel started working at Columbia Neon, in the painting department. His curiosity about the shop’s operation extended beyond the craftsmanship of the signage, and within a few years, he’d also get out of the shop, to assist with installations, and work with customers, to fulfill their signage and other large format advertising needs. 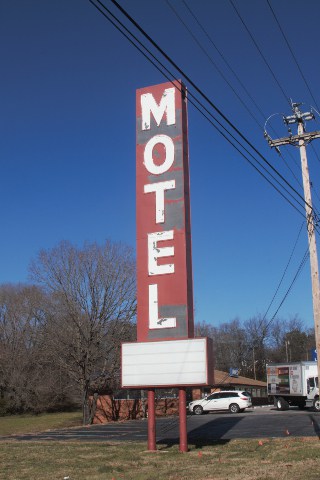 His first trip into the field either set, or confirmed, his mettle, as it were: In 1963, the local Polk Motel ordered a sign to compete with a Holiday Inn that had recently opened just up U.S. 31. The sign was designed to be close to sixty feet tall, so that it was visible from the new competitor’s location. The shop constructed it in parts, and then would assemble it in its entirety on site. To connect the parts of the sign, someone had to climb up inside the sign and weld the metal pieces together. Charles, always a lean man, could fit inside the sign with the welding equipment, so as the sign’s pieces were stacked one atop the other, he welded them together, all the way to the ‘Polk’ that was placed at the top.

The motel’s name was removed in early 2019 to be placed in Columbia’s new Visitor Center, while the M-O-T-E-L still stands on U.S. 31. Another neon sign the motel had has also been removed and now stands in the lobby of a new hotel in Nashville. This site will feature another hotel soon, though they may not keep this remaining sign. 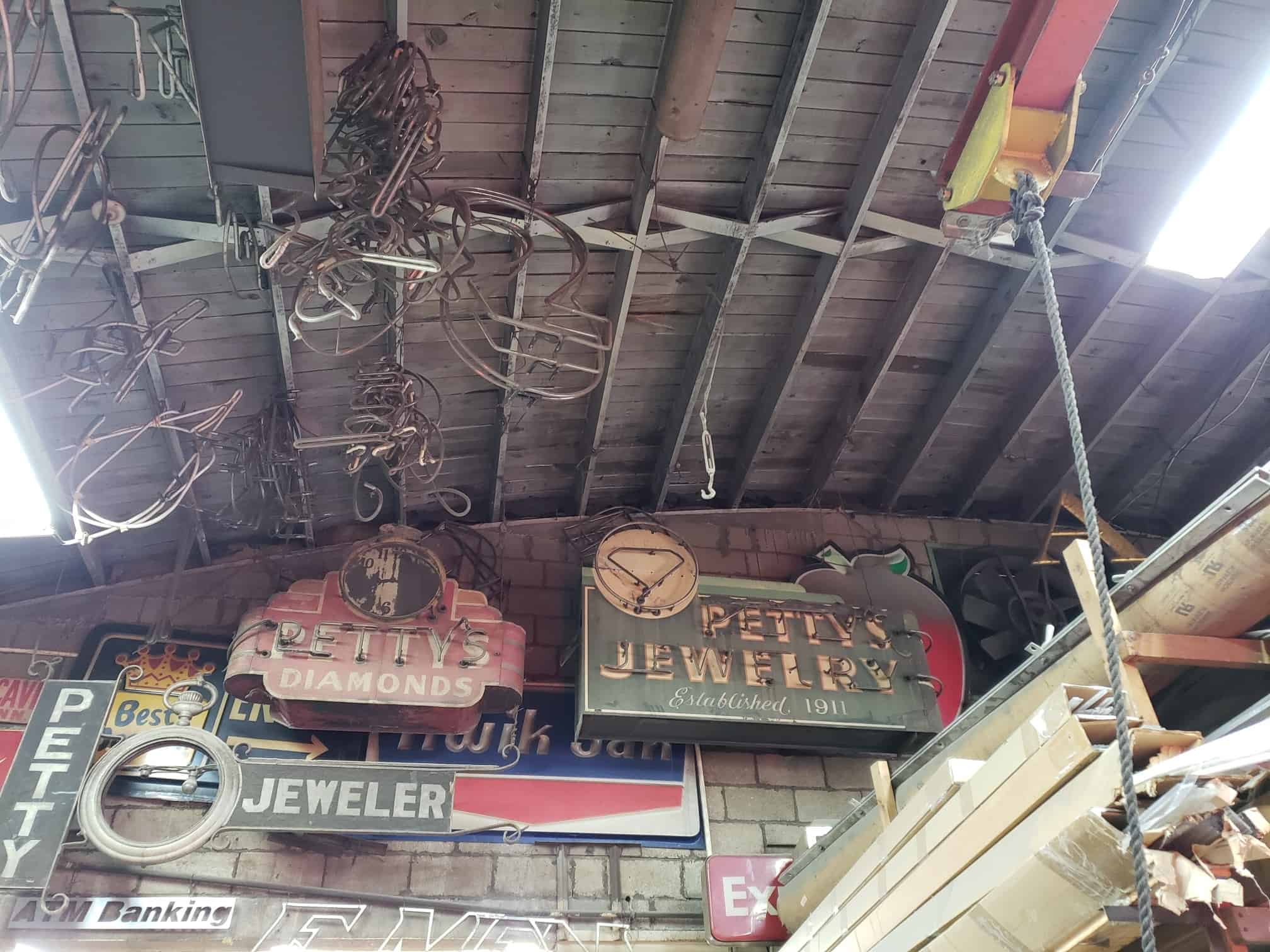 Charles’ willingness to do what was needed, combined with his ease, and it would seem, delight, in talking to the shop’s clients, who live and work in cities and towns across the state, served him well. As he honed his expertise in the processes of sign-making, he took on more and more responsibility in working with customers and managing installations, and eventually purchased the business. While listening to him relate the stories of some of the old signs hanging in the rafters of the shop, or explaining how the glass tubes become a sign, it is clear that he recognizes that the signs the shop continue to make document the history of his hometown, Columbia, and of many towns throughout the state.

For example, as a business flourished, additional signs might be necessary, or, as one restaurant in a town was closing, another in need of a ‘CAFÉ’ sign might open  . . . the business records of Columbia Neon tell these stories not only in dates, names, and locations, but also in drawings, for the signs, as well as photographs documenting the installations. Designs for the signs (shown, in the photo below) are labelled; those identifiers are then noted in the job files, along with installation notes and photographs.  All together, these pieces of paper create a richly detailed map of what drivers would see first and foremost while traveling our American routes –the signs and billboards enticing them to stop for a hot meal, the perfect gift for someone back home, or a place to lay their heads for the night.

While Columbia Neon Company has lit signage in its name, the shop produced painted signs, and pasted up billboards too, and has thoughtfully adapted advances to its technology to meet the needs of their clients, while still maintaining a level of quality to ensure the signage, no matter the material, lasts as long as possible. In the twenty-first century, that means that the sign designers work on computers to more easily communicate with clients and the modern equipment that is in the shop, they maintain hundreds of billboards (that the shop owns and rents the space for) with vinyl signage, and they create molded signage and sometimes use LED lighting to illuminate new ‘neon’ signs. 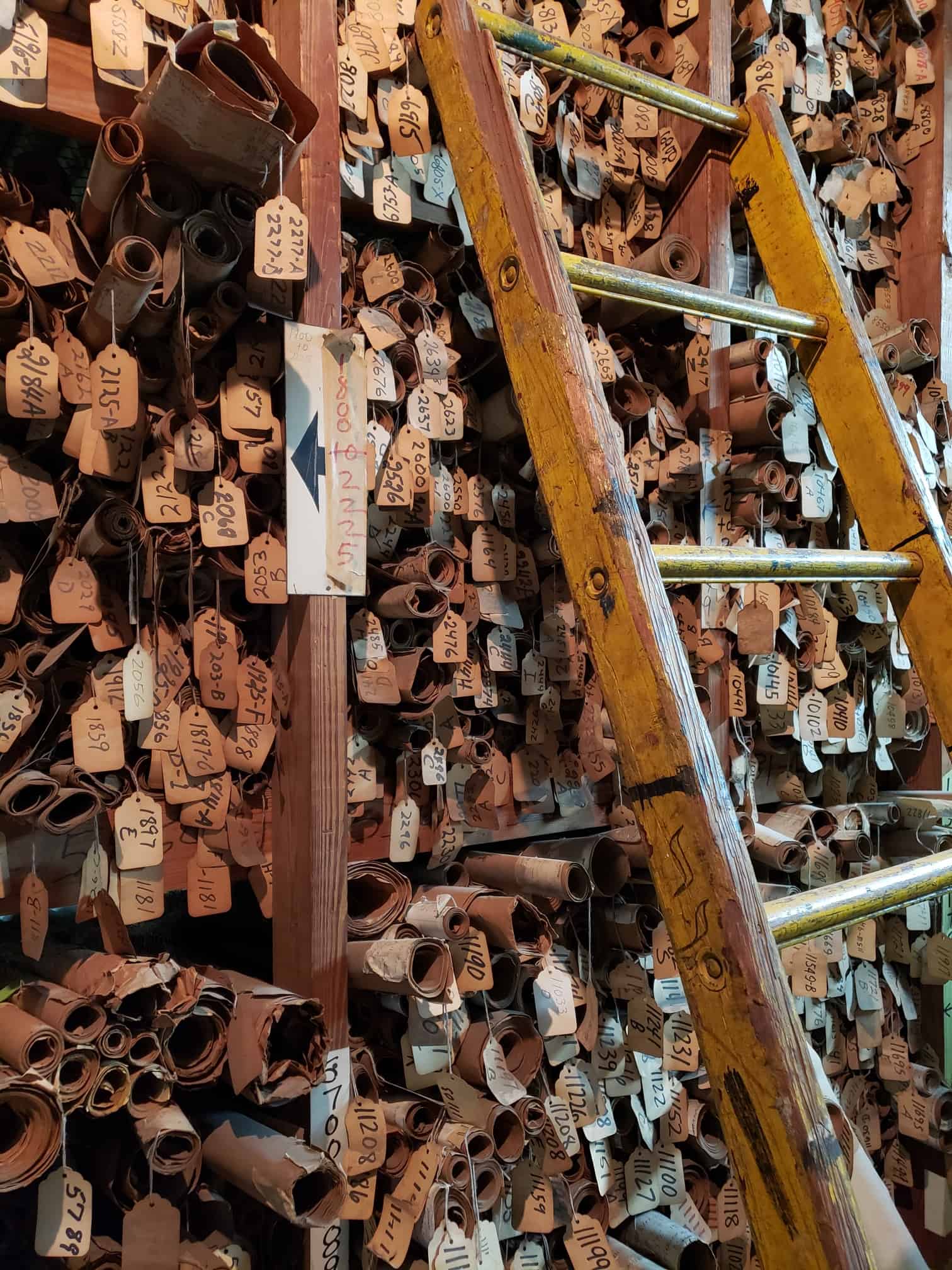 They continue to work with glowing gas, too, and are adding new clients to their job boards for this aspect of their business, as both Nashville and Columbia are currently growing and thriving with new businesses and services eager to hang out a well-lit shingle, or adapt vintage and restored signs into their public spaces, as part of the decor.

In this era, just like a well-designed and letterpress printed poster, a well-made neon sign takes a dedicated and experienced team. To restore the Hatch Show Print neon sign, there were many steps. Of course we love it – there is a process!

Here is a photographic step by step process (more or less): 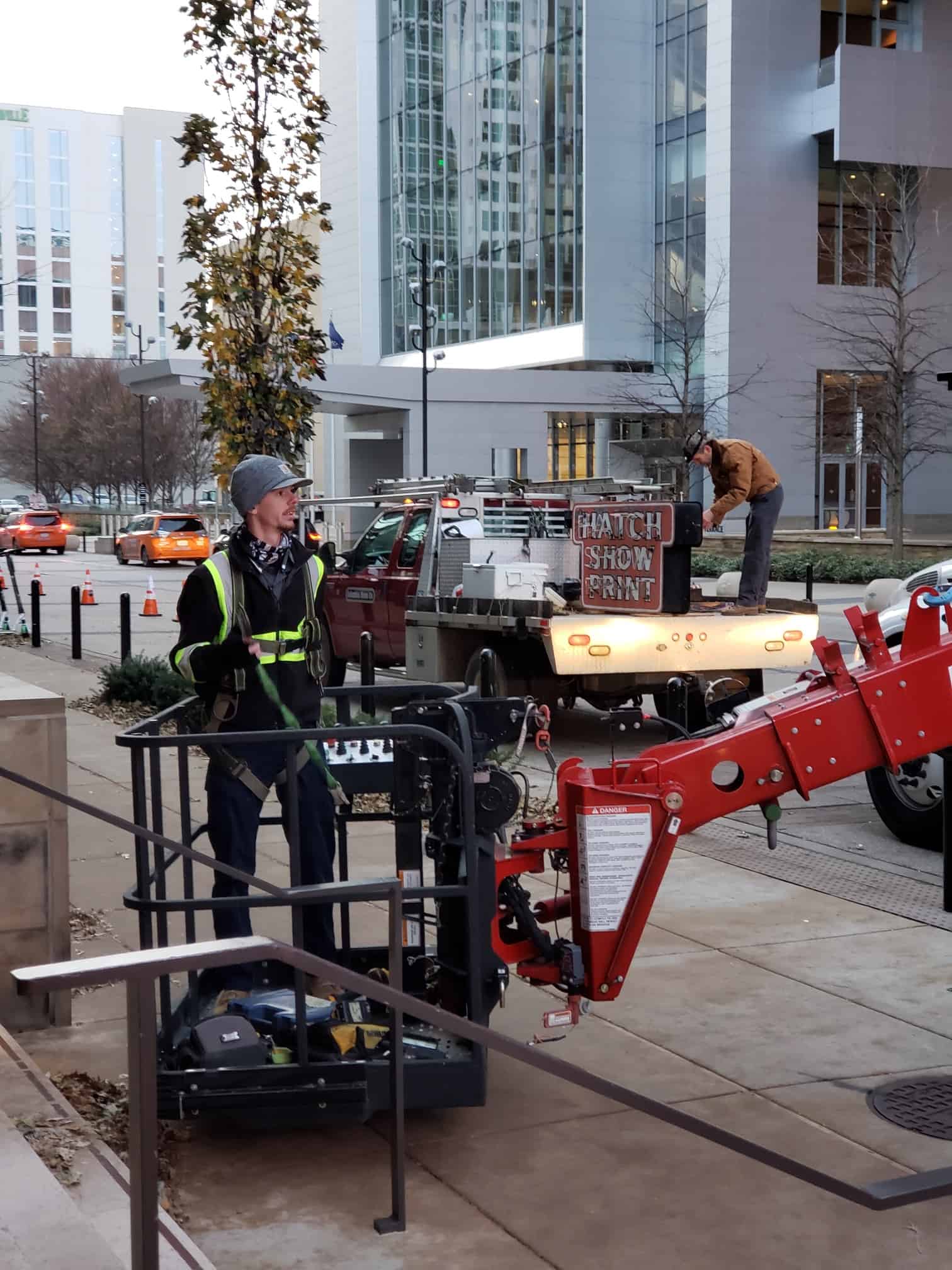 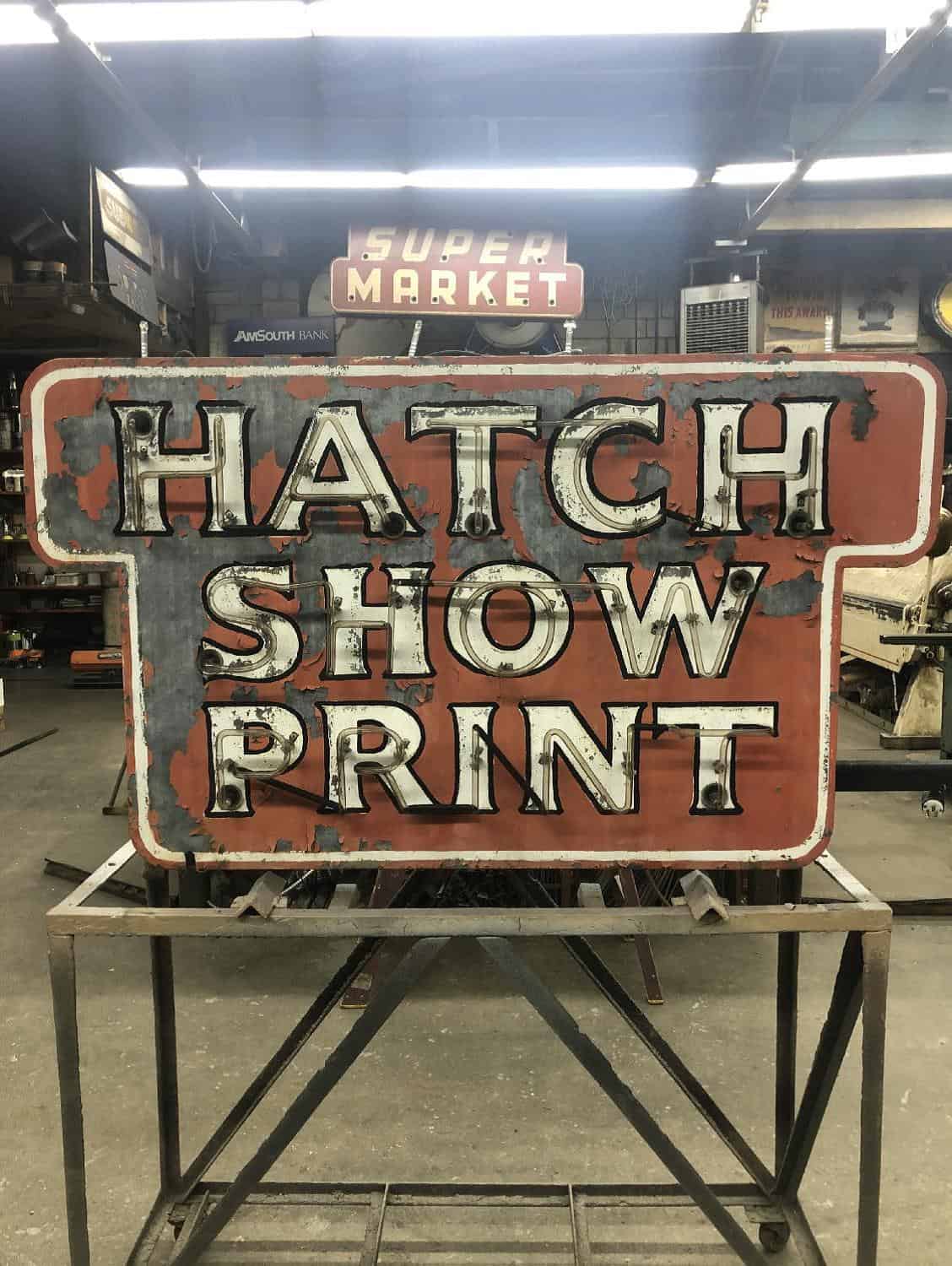 Document the artwork on the sign (photographs, tracings, if necessary). Remove the neon and electrical elements. 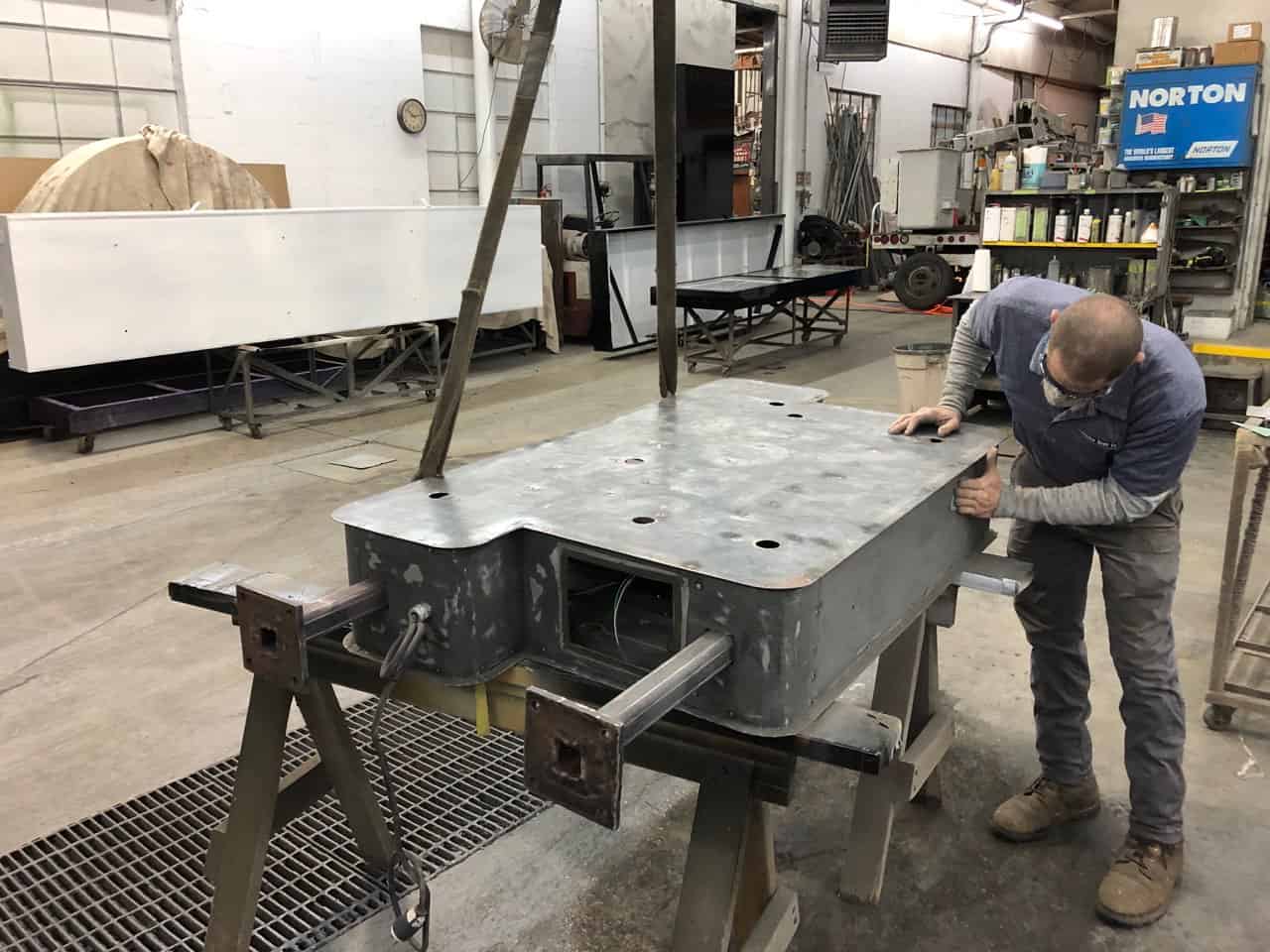 Strip the old paint from the metal base

Restore and repair any damage to the metal – in the case of our sign, sealed cracks or openings where rain could get into the electrical parts. Sometimes the metal base gets dented, or the edges are bent, by accident. 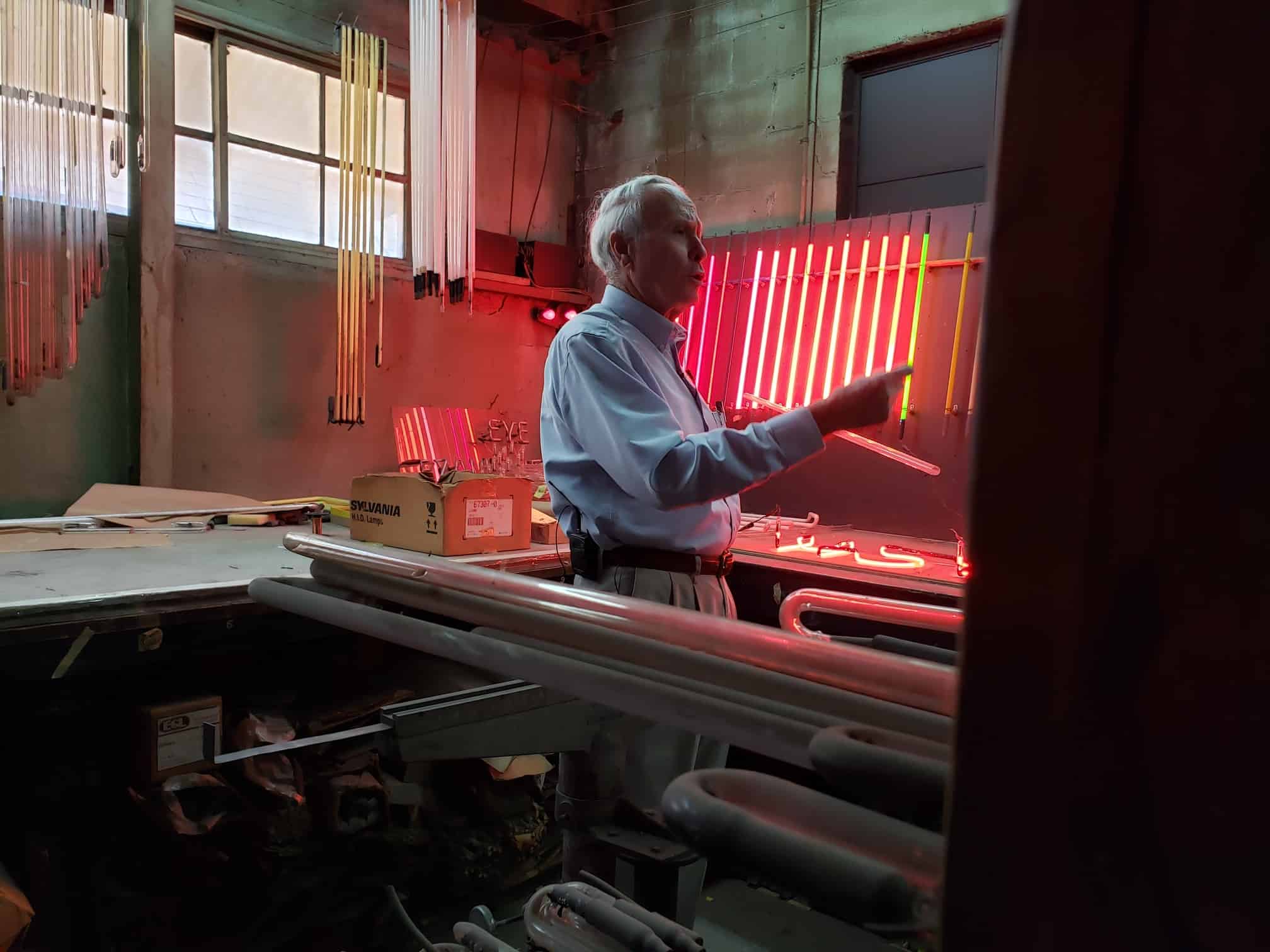 Bend new glass tubing to replace any damaged tubing and fill with neon or argon – fortunately our tubing was good! There are more expert descriptions available on how neon lighting works, but an abbreviated version is that certain gases (for commercial signage, neon and argon are typically used) are trapped within the tubing, and as electricity is applied at cathodes installed at intervals across a gas-enclosed tube, an electrical glow discharge is emitted; for neon, the glow is pink to red, and for argon it is light lavender-blue to blue when a bit of mercury is added to the tube; other colors are created with fluorescent coatings applied to the tubing. Here, Charles is explaining this to us. 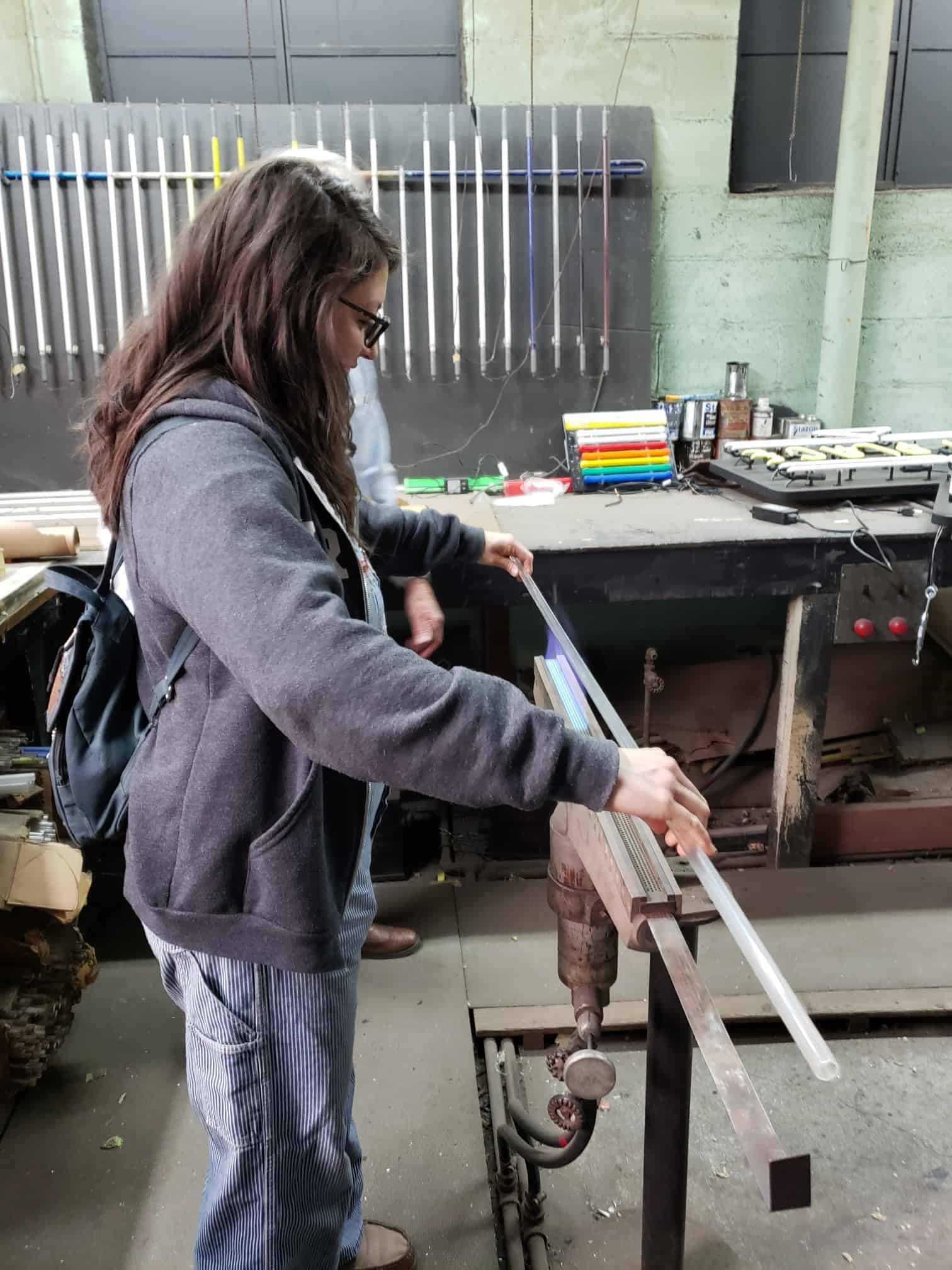 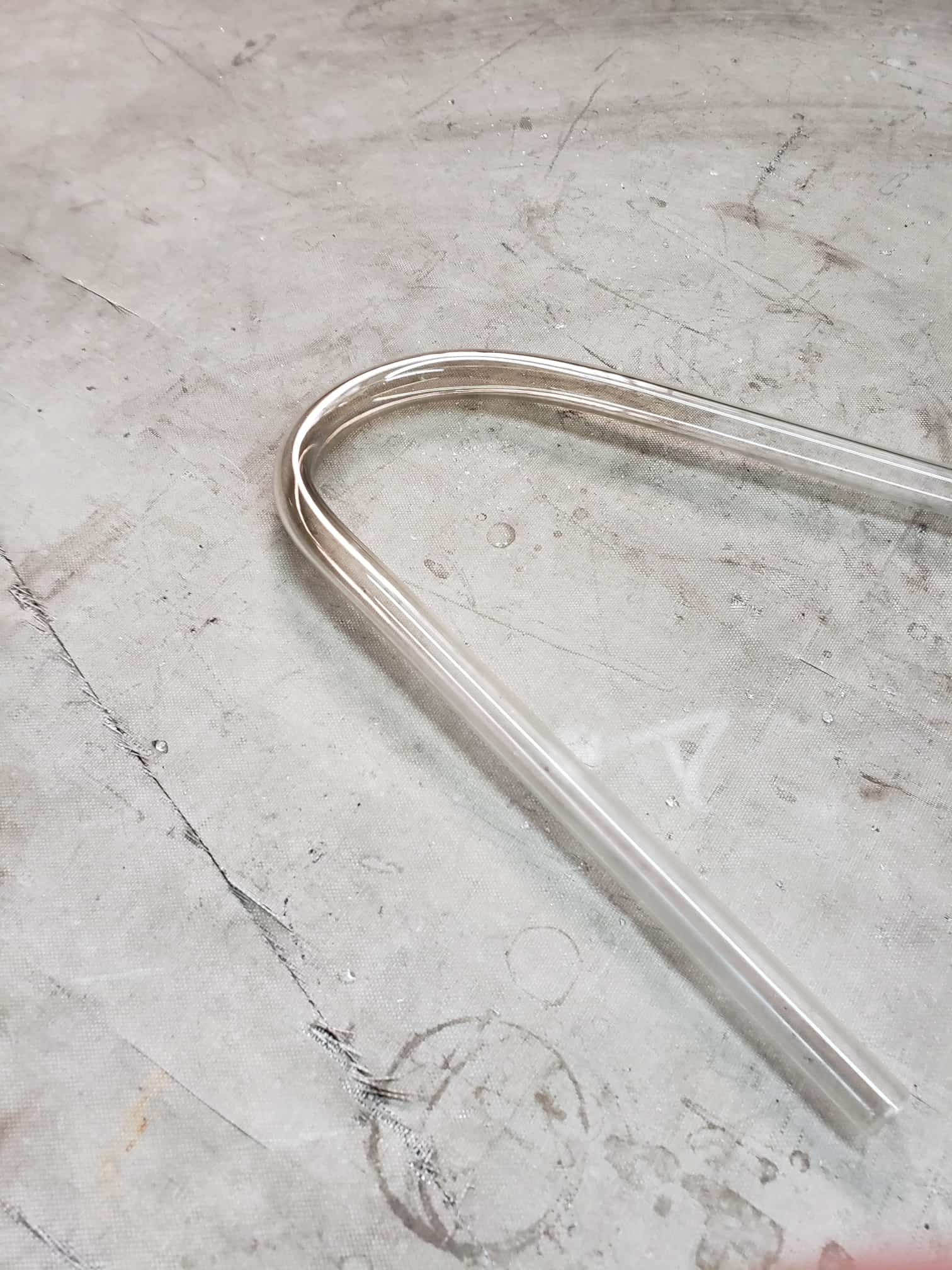 To bend glass tubing for neon, it is heated over an open flame until it’s soft through and through, and then it can be bent using patterns, drawn or printed actual size, as guides. 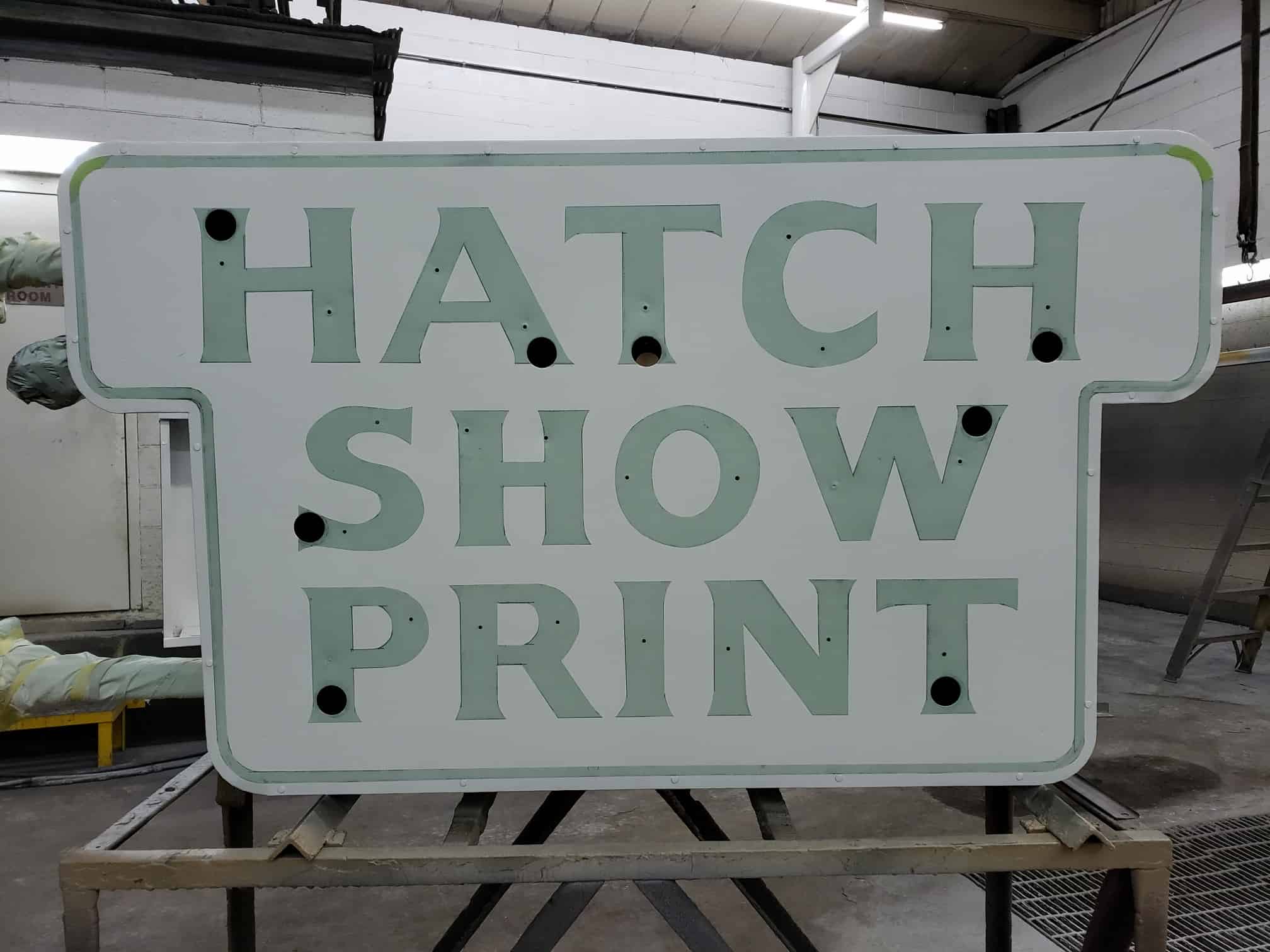 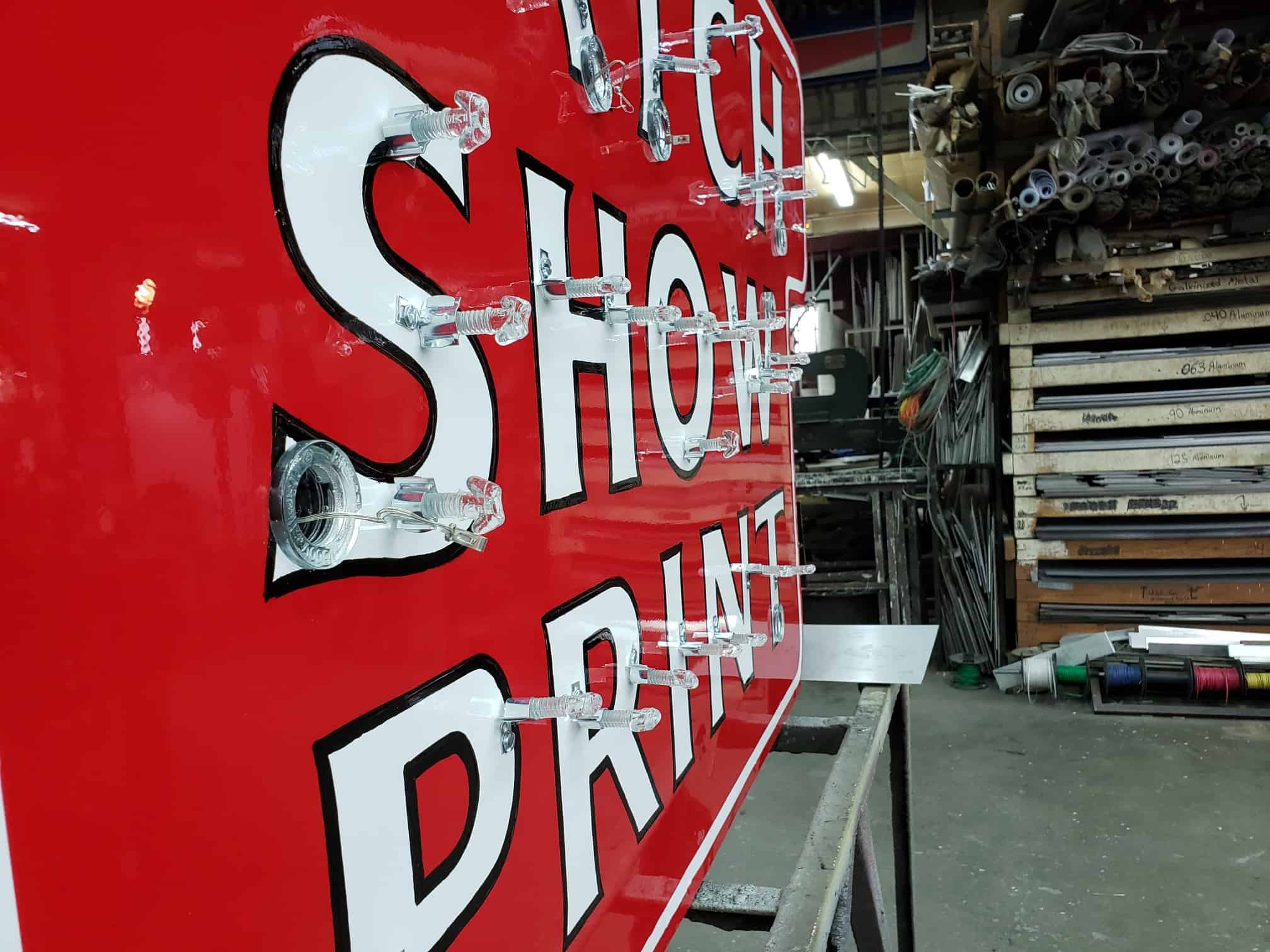 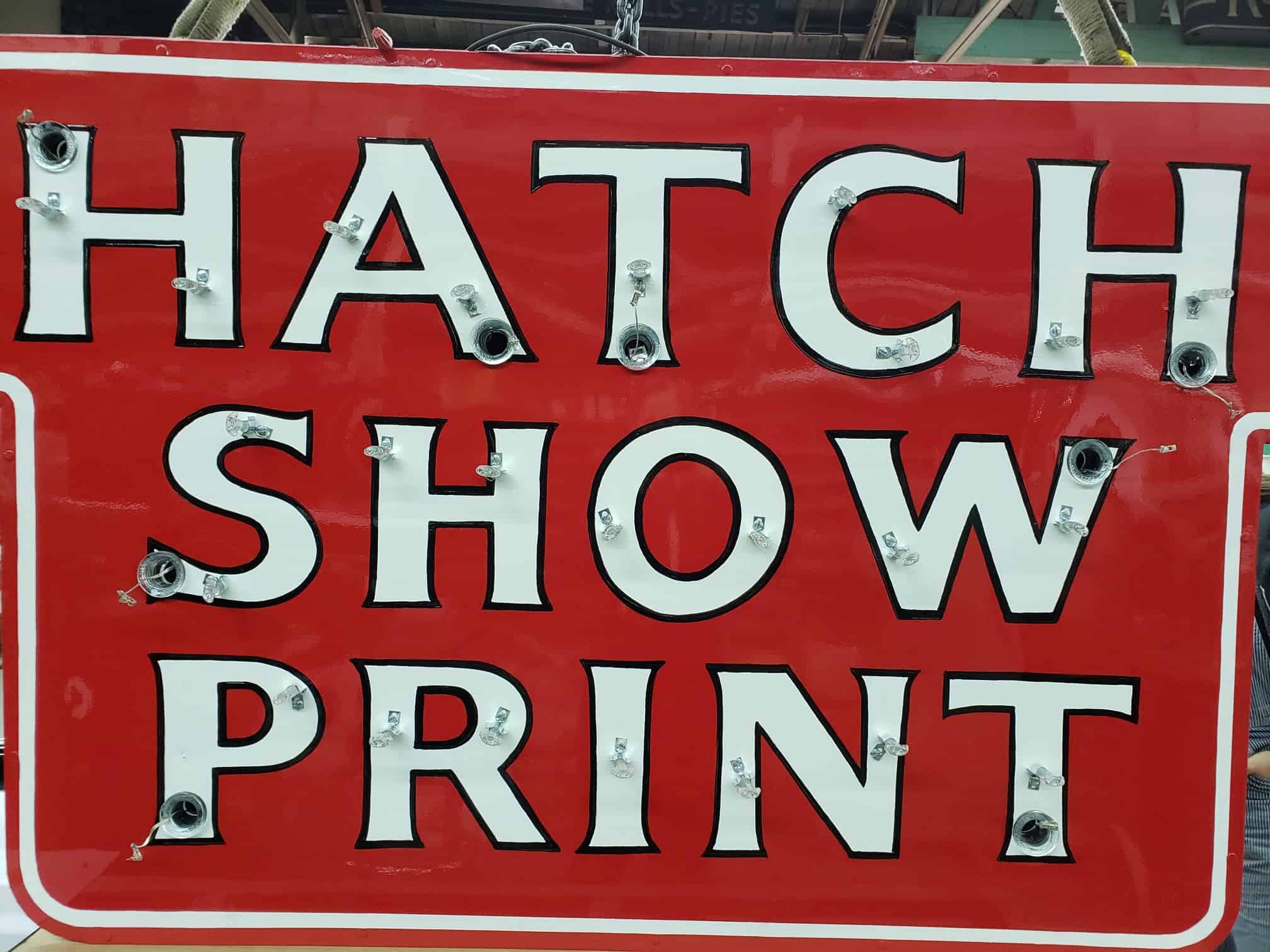 Paint the sign. Our sign, repainted, with some of the neon housing and bracketing reinstalled. (It’s very shiny!) 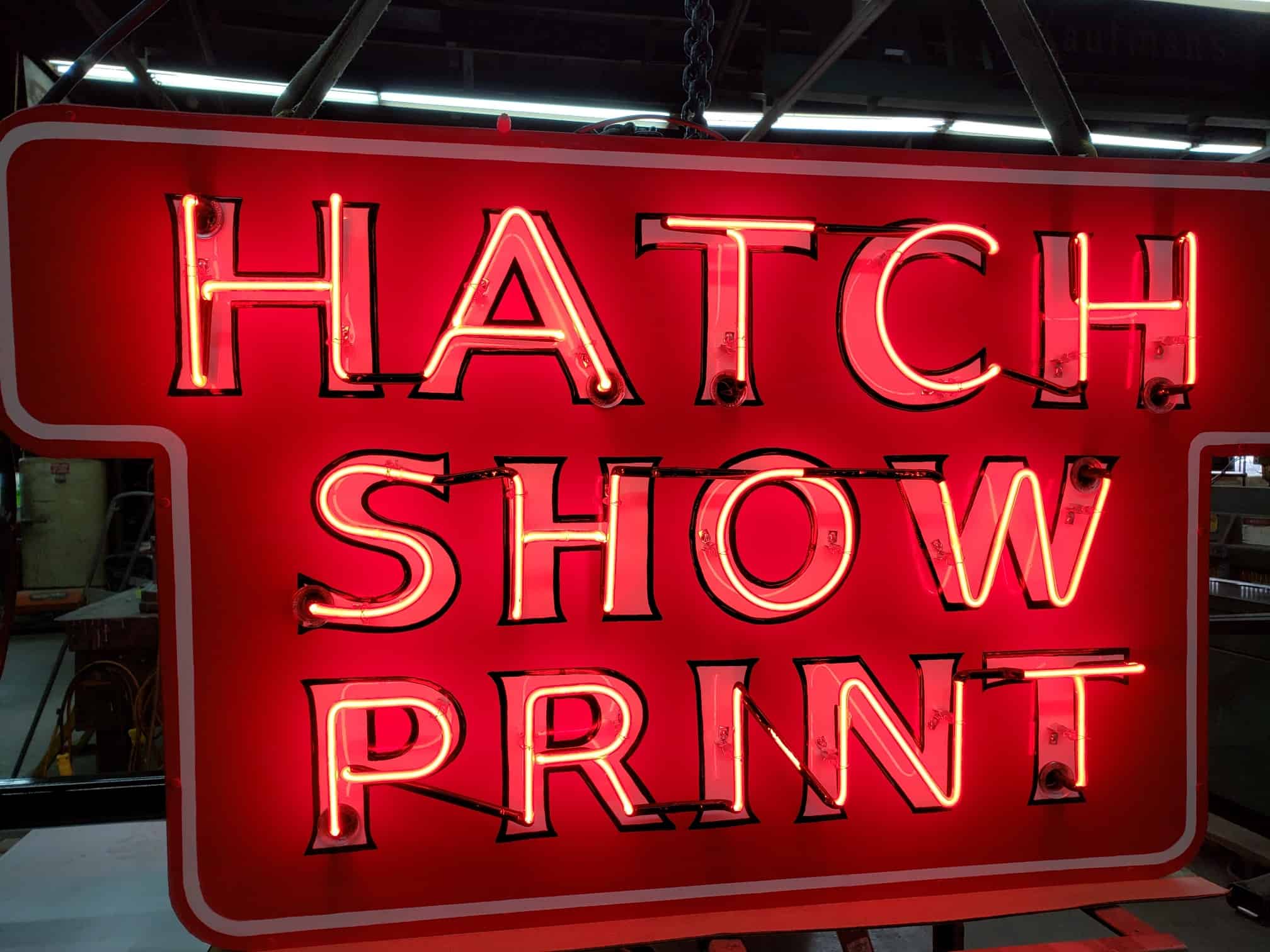 Paint or repaint the glass tubing-called ‘blocking out’- with black paint applied to the areas where the light needs to be blacked out, so the letters don’t all just run together and they can be easily read, even though the whole word is a single, connected piece of tubing. In this image, you might detect a few areas where the block out had worn off (such as between I and N in PRINT); that was repainted. 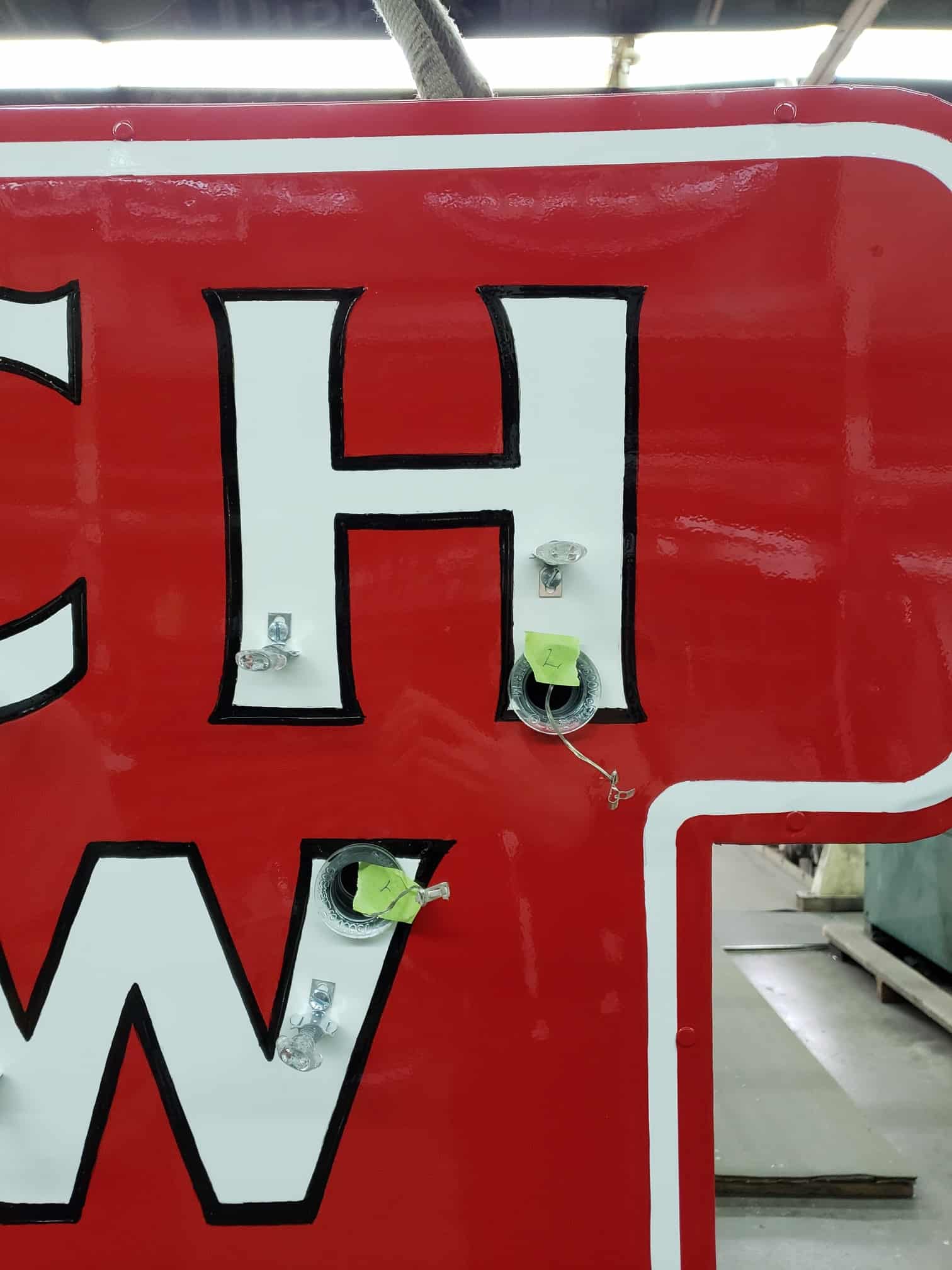 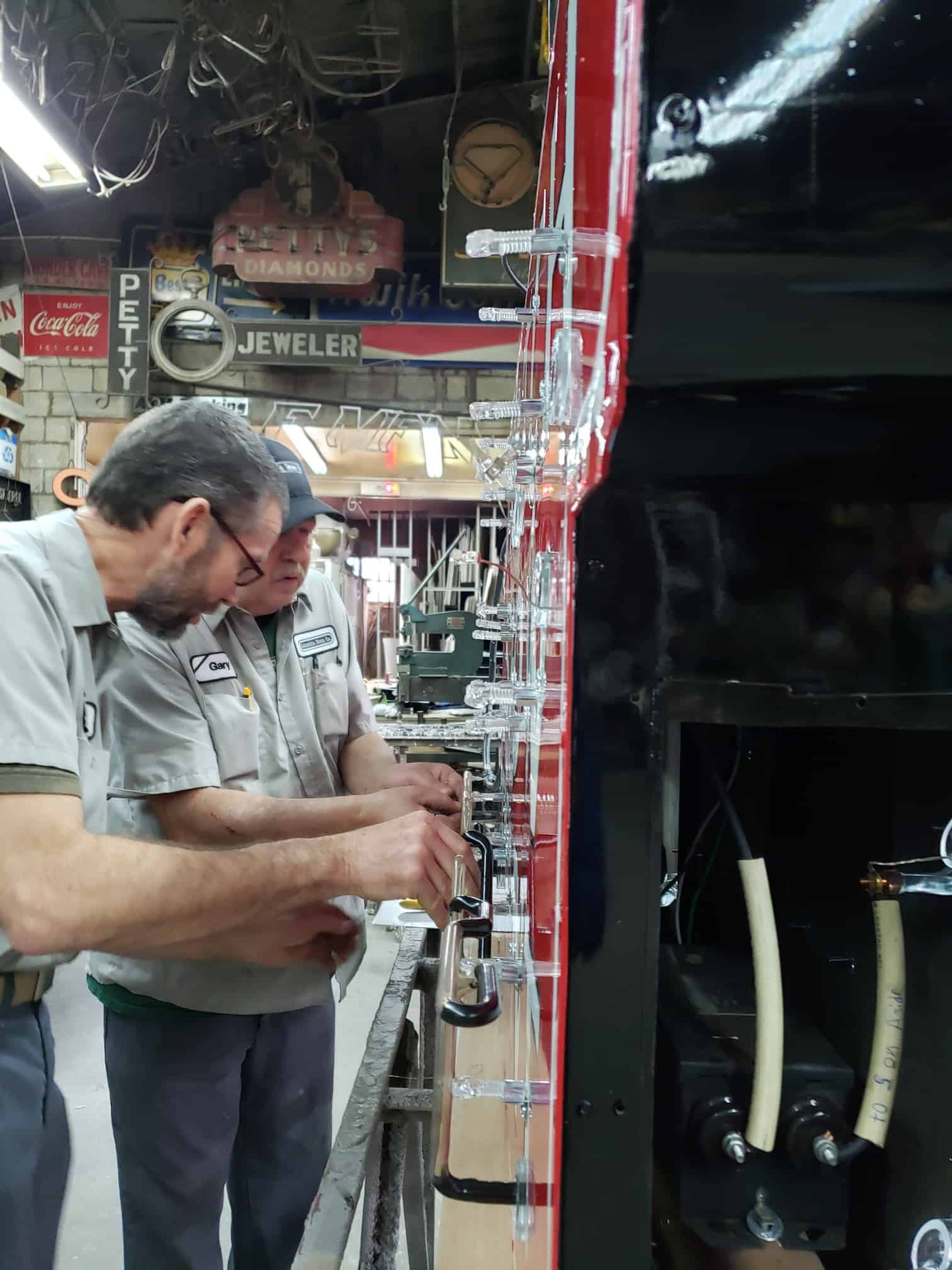 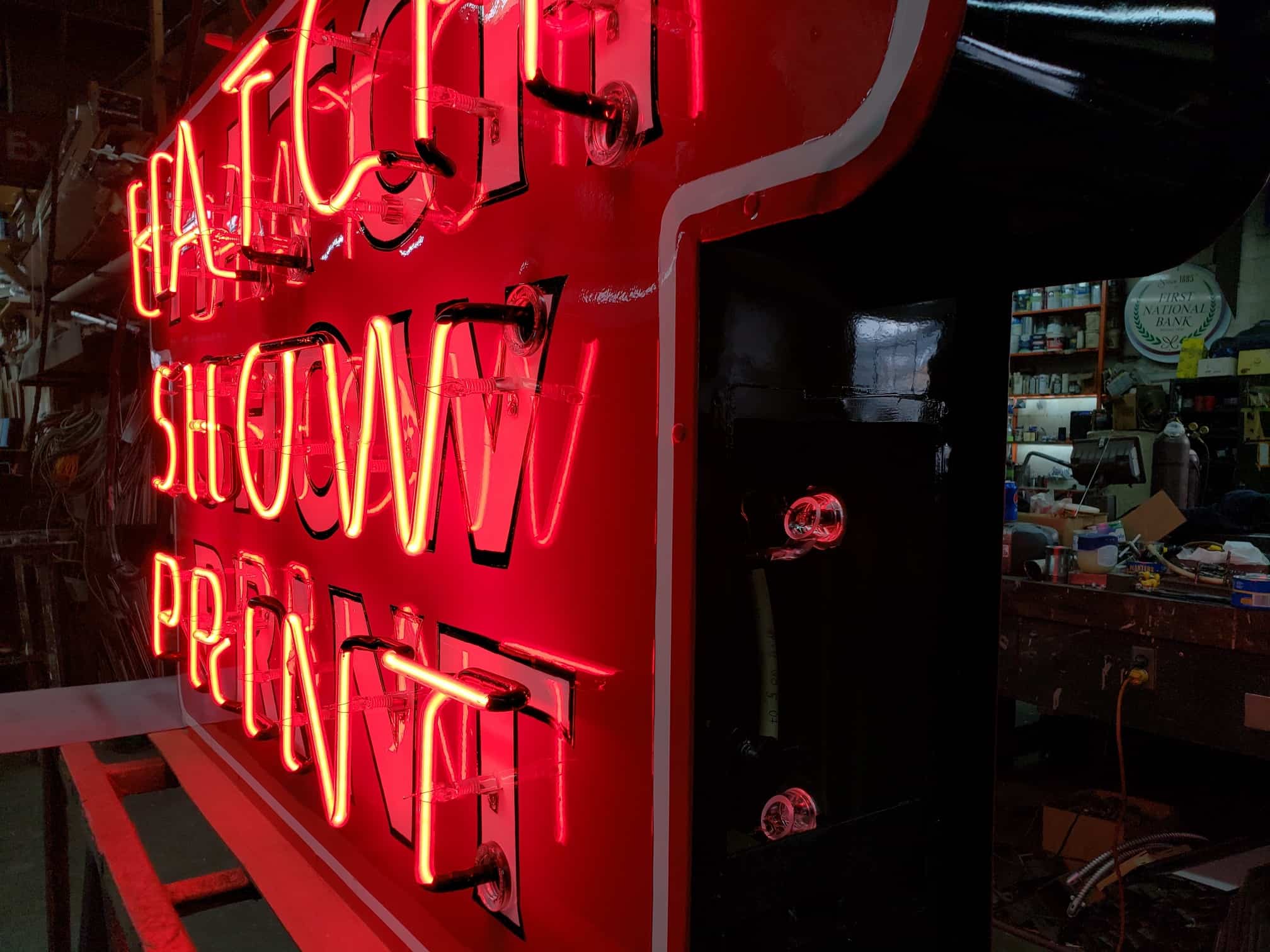 Test electrical wiring, and once satisfied, secure tubing firmly to the sign and electric parts. 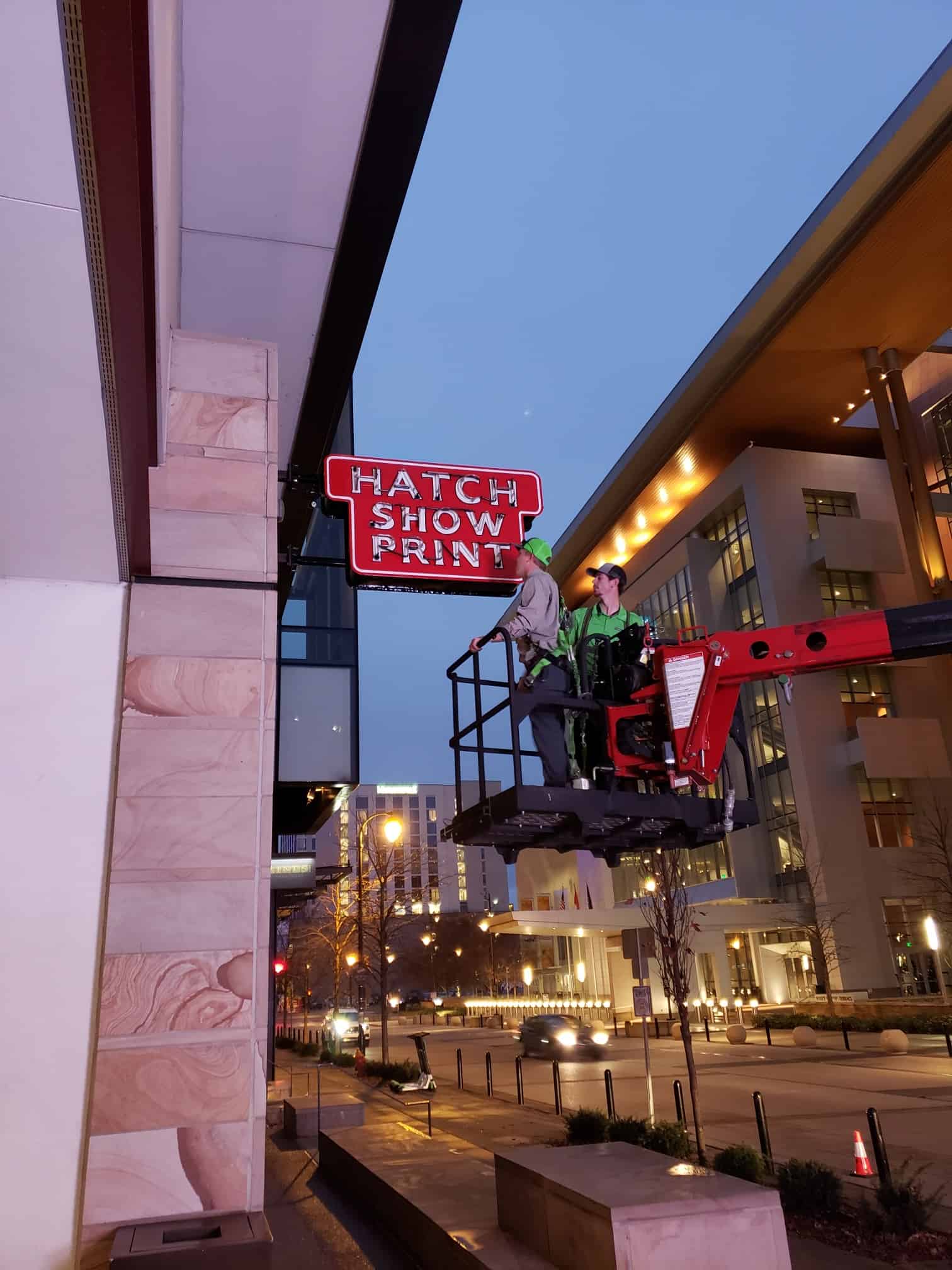 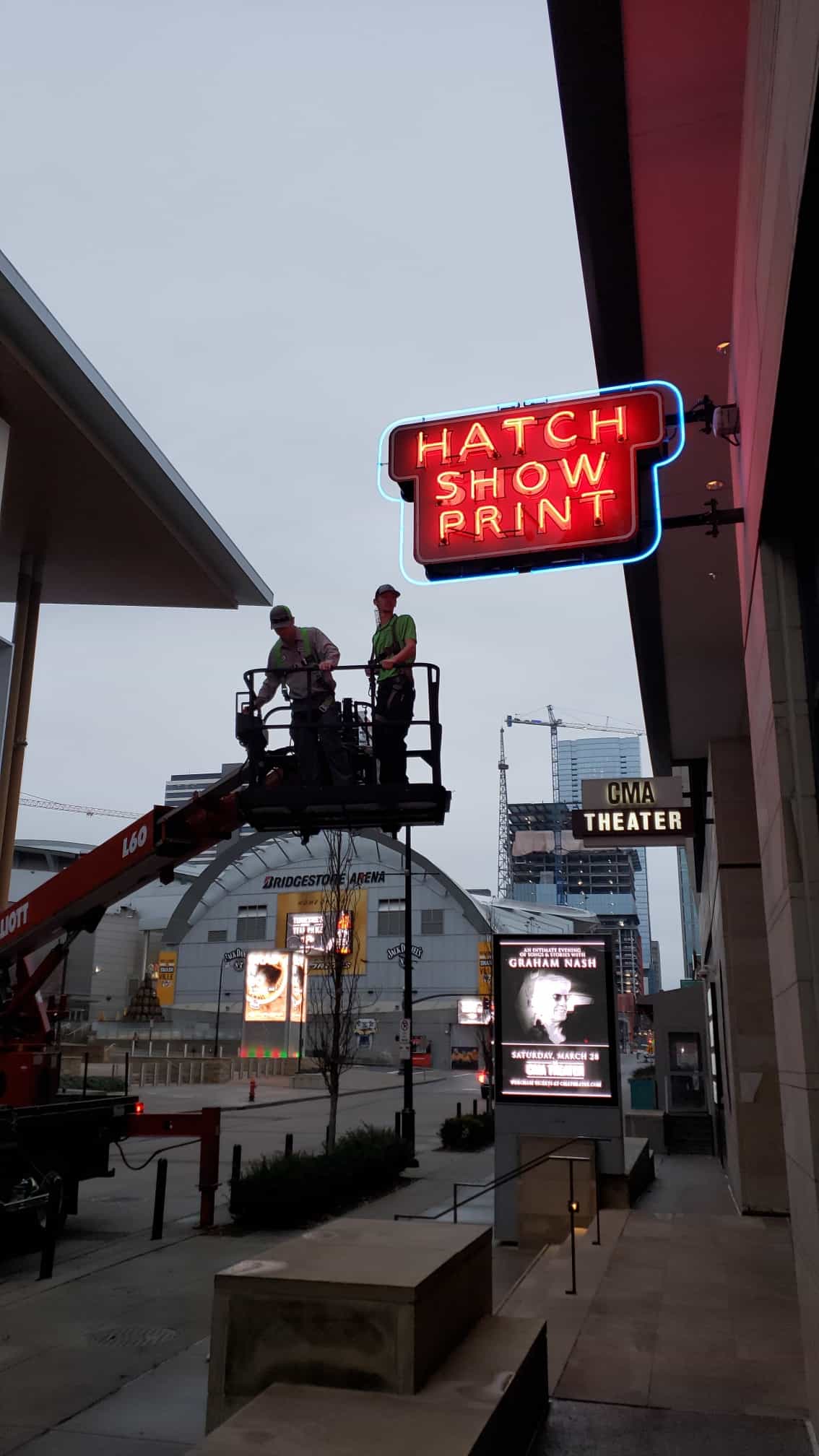 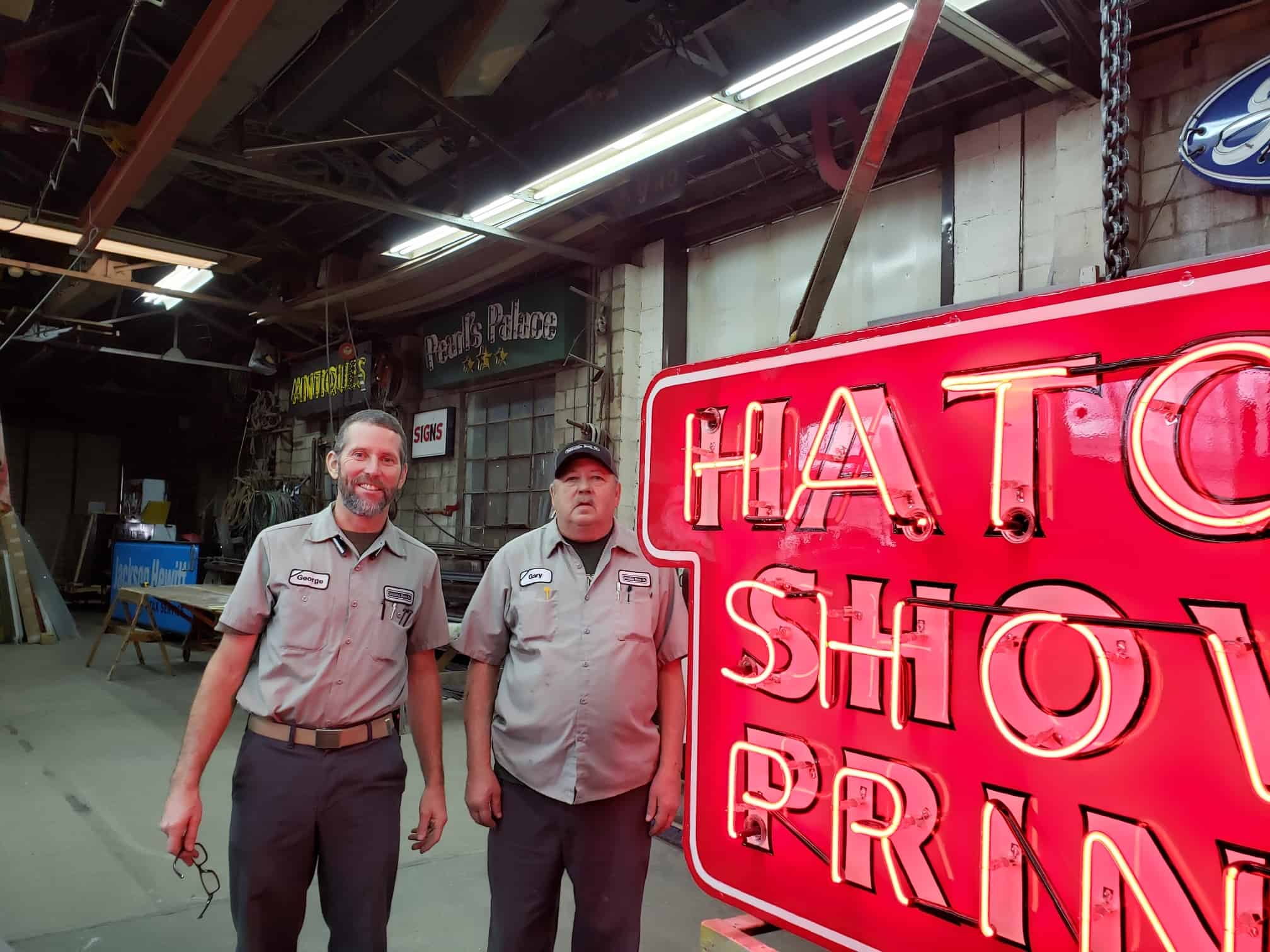 As the reader might imagine, we feel we have met kindred spirits, in the sign makers at Columbia Neon Company. We are in the business of using our craftsmanship, that blend of technical expertise and creative problem solving, to make our clients look good and present an unforgettable aspect to their constituencies, whether they are show-goers or diners. And, the work that we produce is reflective of the larger stories, of what happened and where, and the places people will go, this year, last year, and hopefully for both of our shops, for many years to come.

We are fortunate in that not only did we meet Charles Stofel, we also met and worked with his son, George (in the image above, on the left), his daughter-in-law, Shannon, and their son, Weston.

A family tradition is alive and well at Columbia Neon Company!

*Hatch Show Print’s neon was the second neon sign on Broadway, the first being for Enest Tubbs’ Record Store. As the revitalization of Broadway has transformed it into the honky-tonk highway it is today, a lit sign has become the traditional and accepted way to advertise what’s inside each building on lower Broad.