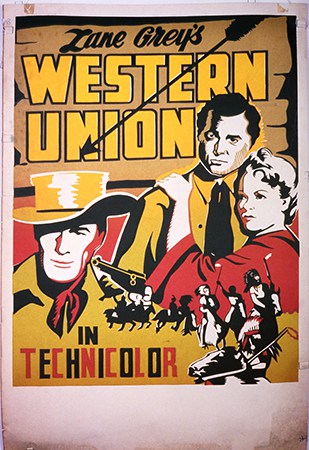 Hatch Show Print has been operating in Nashville since 1879. The history of the shop mirrors the spectrum of American entertainment from the late 1800s to today. For 140 years, the business has provided entertainers of all stripes—from circuses and magicians and vaudeville acts to country music stars and rock & roll bands—with eye-catching posters that combine color, individuality, and bold, tactile design. The shop has an ongoing relationship with cinema, too, producing advertising posters and ephemera in the twentieth century, and prop and commemorative posters in the digital era.

Movie posters, tickets, flyers, and a variety of other products used for advertising, such as prints called ‘hangover dashboard covers’ and ‘wheel covers,’ were all produced by Hatch Show Print to help area theater owners sell movie tickets. While the smaller ephemera mainly carried text, the posters that advertised the films were an opportunity for the poster makers at the shop to create eye-catching visuals that enticed customers to hand over their nickels, dimes, or quarters for entry into the theaters. For each movie poster the shop created, hand carving the imagery out of wood, thousands of posters were printed and distributed to theaters from the states along the southern east coast, west to Texas, and all the states in between.

The film companies provided theater owners with ‘press books’ that were part of the campaign kits distributed for every movie the studios put out. Campaign kits provided information about the movie, including a synopsis of the story, and a cast list and biographies, plus the press book that contained a variety of marketing or promotional tools the theater owners could use to entice moviegoers into the theaters. Often included in the press book were advertising art, such as ‘slugs’ that took up about one by two inches in the newspaper; full size advertisements; radio commercial ideas; promotional games and ideas; contests, promotions, product tie-ins; and movie merchandising ideas. The press books also displayed examples of pre-printed posters and other advertisements, including lobby cards (eleven by fourteen inches), to one sheet posters (twenty-seven inches by forty or forty-one inches), to twenty-four-sheet billboards. These movie posters could be purchased, or rented.

From the dawn of cinemas (first called “nickelodeons”) shortly after the turn of the twentieth century, until around 1940, the movie studios themselves produced and sold or rented these posters. From around 1940 into the early 1980s, one by one, the studios turned this task over to the National Screen Services Corporation. By the mid-1980s, the rise of the multi-screen theater changed the way theater owners advertised current and upcoming movies, as advertising wall space had to be divided among the multiple films that were now screening in each theater. Combined with the dawn of the internet, a medium that continues to grow as a promotional tool, even today, the variety of movie poster styles and sizes was streamlined, and that made it easier for the movie studios to once again start producing and distributing them.

The last two paragraphs are but the briefest summary of the history of movie posters—the film advertisements that did not wind up in a newspaper, or magazine, or on the radio or television.

While we are still searching for all the parts to make a reliable time machine, we cannot travel back to the early twentieth century to sit Will T. Hatch down for an interview, and ask him any of the questions that come up through the days working in the print shop, such as: How did a shop like Hatch Show Print find itself in the position to create and print its own movie posters (at the request of theater-owning customers), when the film studios and the National Screen Services Corporation seemed to have such a tight control on the business? The film studios did not demand the theater owners use the materials provided in the press books and by the National Screen Service; though, from a theater owner’s perspective, it seems that these materials did offer efficient and effective methods to promote the films.

Certainly the shop’s reputation, nearly forty years in the making by the end of World War I, would have been strong enough to enlist the confidence of any business owner in search of advertising. The shop’s business records reflect that in addition to show business, it worked with customers whose services or products were representative of most aspects of everyday American life, such as grocery stores, churches, construction companies, real estate agencies, fraternal organizations, theaters, civic organizations, and many in between. The movie posters the shop put out showed how well Will T. Hatch and his staff’s illustration skills were employed, to create compelling images inspired by the examples provided in the press books, but tailored for relief printing and the bold style the shop was known for.

Some of Hatch Show Print’s customers from the last century have also included the movie production companies themselves. Given the undertaking the development and production of a film can be, it’s possible scenes featuring the shop’s work wound up on the cutting room floor, but the shop was called upon to make prop posters for a number of movies in the late twentieth century, including Fried Green Tomatoes, Of Mice and Men, and Living Proof: The Hank Williams, Jr. Story (made for television).* And, just like our colleagues in the music industry, a number of filmmakers have found the unique and textural quality of a print from Hatch Show Print to be the perfect way to commemorate a film, and they have given them as mementos of the production to cast and crew.

We are thankful for traces of the shop’s history in the movie advertising business that still exist. The one sheet wood print blocks that remain in the shop’s magical wall o’wood feature the imagery the designers in the shop created, and the archive of business records and limited selection of original posters will allow for an opportunity to piece together a fuller story.

*To get a much closer look at the world of printing in contemporary films, and more, pay a visit to our inky-hearted friends at The International Museum of Printing. Officially established in 1988, the Museum continues to grow from an incredible collection of printing equipment and tools, and books on printing and book history. As experts in all things printing-related, the Museum works with the film industry to lend authenticity to any inkiness that happens on screen.

Example pages of a press book, taken from the materials provided to promote the 1940 film, North West Mounted Police: the cover; and the introduction to the film; with full credits, and an array of articles that could be submitted to a local newspaper to drive interest in the film. 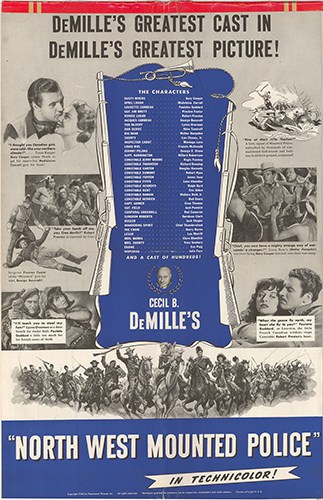 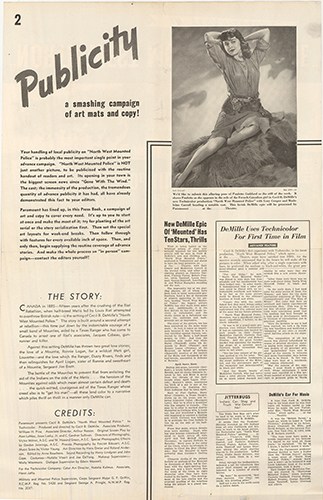 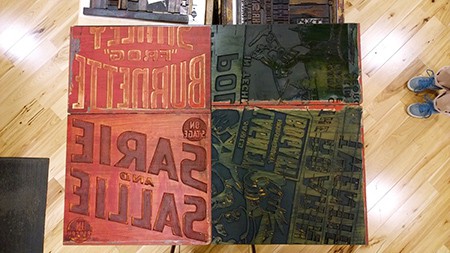 Economizing in a print shop sometimes meant that once a large block had served its commercial purpose, it would be put to use in other ways, such as forming the table top for an imposing table, built in the shop in 1940 or 1941. The discovery of these blocks took place in 2013, when the shop was moved from Broadway to its home on Fifth Avenue South, and the table was dismantled in 2015 to remove portions of four blocks that had been used to form a foundation for the metal top. The table was reassembled with uncarved wood, and these blocks have been returned to the magical wall o’wood. Two of the blocks removed from the table were advertisements for Opry entertainers, and the other two were image blocks for the movies North West Mounted Police, 1940, and The Roaring Twenties, 1939. 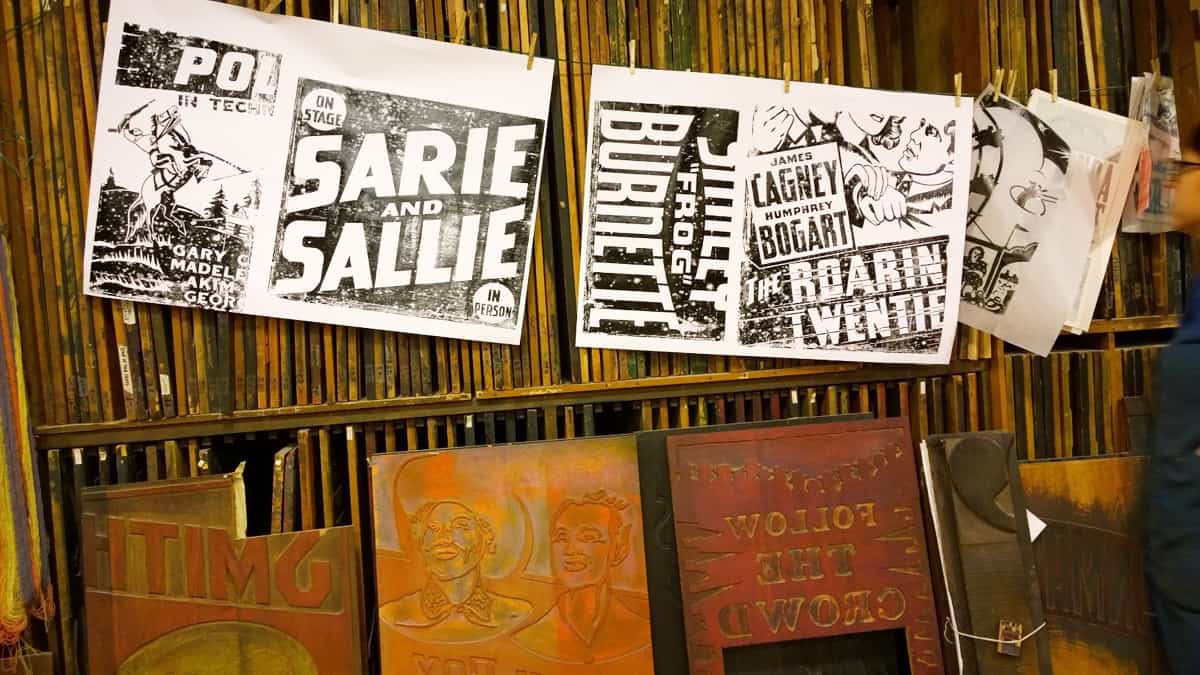 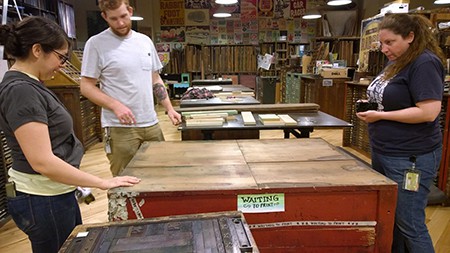 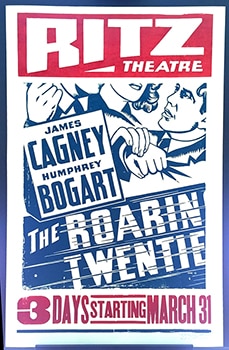 While the image block for North West Mounted Police hasn’t been reprinted yet, the block for The Roaring Twenties has been reprinted. A theater header from the chain of theaters that showed this movie in its original run was used, with a set of imaginary dates, though a short run of three days reflects the practice of film screenings at that time. 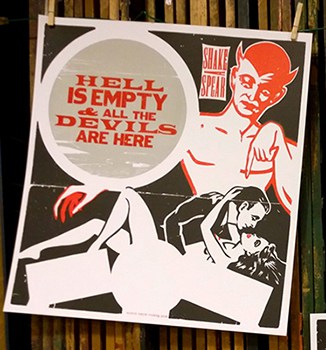 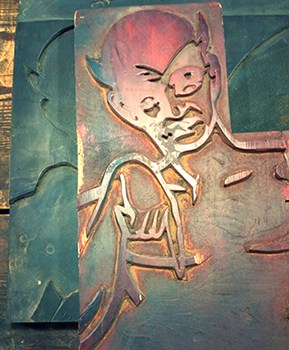 Propaganda films would often use lurid graphics to entice viewers into the theater, as bait, while the movie itself was either a sermon on the ill-effects of vice, or a morality tale meant to teach viewers to remain virtuous. Originally a one sheet, approximately twenty-six by forty inches, both blocks of this two color poster have been cut into pieces. 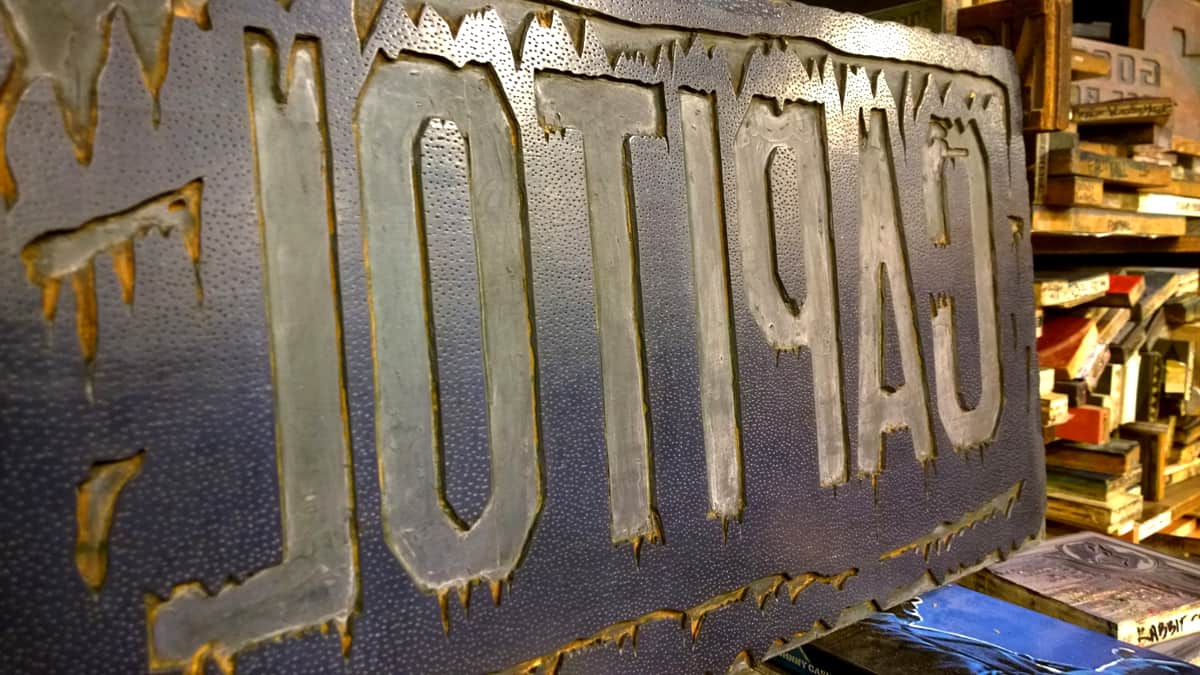 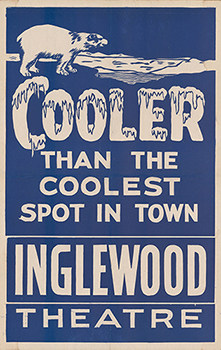 Movie theaters were among the earliest buildings that had air conditioning. Hatch Show Print advertisement designs included imagery and lettering that conveyed this attractive feature for its movie theater clients, as can be seen in this hand carved block for Capitol Theater, late 1940s or early 1950s, and window card for the Inglewood Theater, circa 1952. In 2020, we’ve repurposed the vintage block with the polar bear to toot our own horn! Window card, approximately fourteen by twenty-two inches. 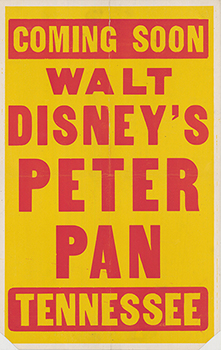 Not all of the movie posters that were made at Hatch Show Print carried hand carved imagery—many, like this poster advertising the impending arrival of the film Peter Pan, circa 1958, leveraged bright and contrasting colors and edge-to-edge text. Window card, approximately fourteen by twenty-two inches. 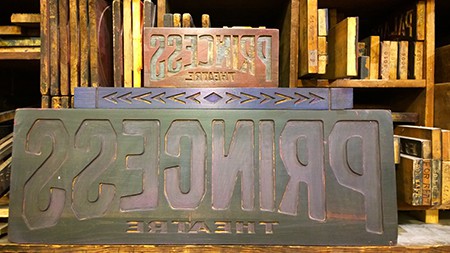 Hatch Show Print made a lot of movie posters in the first seventy-five years of the twentieth century, and an efficient and effective way to customize a movie poster was to create a header block for each theater’s name. The Princess Theaters in Tennessee—Nashville, Knoxville, and Columbia—ordered advertisements in varying sizes, and may have attached prints of the header blocks to the tops of offset posters produced by NSS, to customize them. There is also set of two sheet blocks (eighty inches wide by twenty six inches high) that spell out the theater’s name in the shop’s collection of blocks. 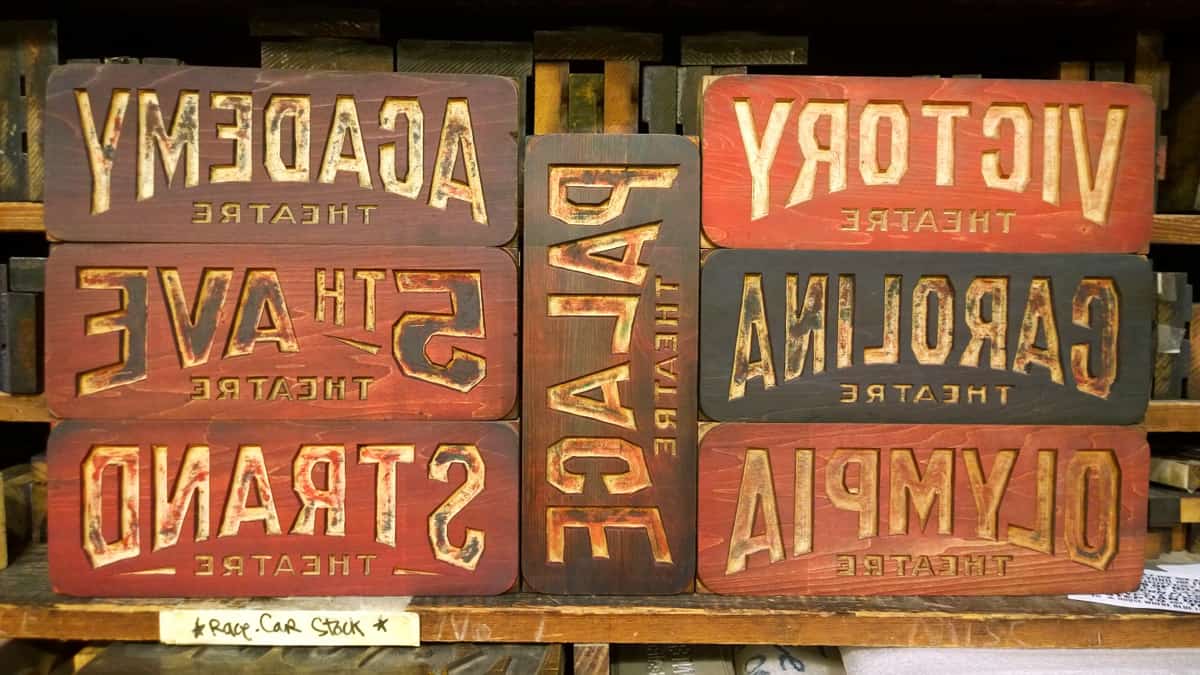