When it came time to consider this year’s guest artist, it was a natural fit to work with a native Tennessean, and fellow fan of the history of this region and its music – known by many as Wayne White, and Hatch Show Print’s 2018 Visiting Artist.

And it has been a blast: The linoleum bits flew for two weeks, as Wayne jumped right into the shop’s letterpress print-based process and carved his first set of multi-color blocks ever (!), and swapped tips and tales with designer-printer Heather (who acted as guide and master printer while Wayne visited this new land of letterpress) and the rest of the staff.

Instead of pulling directly from the shop’s collection of blocks, Wayne opted to carry the tradition forward, and carved new blocks based on his singular illustration style. A large one sheet, incorporating hand lettering many may recognize from Wayne’s word paintings, evokes the down home charm of the early and mid-century illustration work many show poster shops employed to grab folks’ attention. 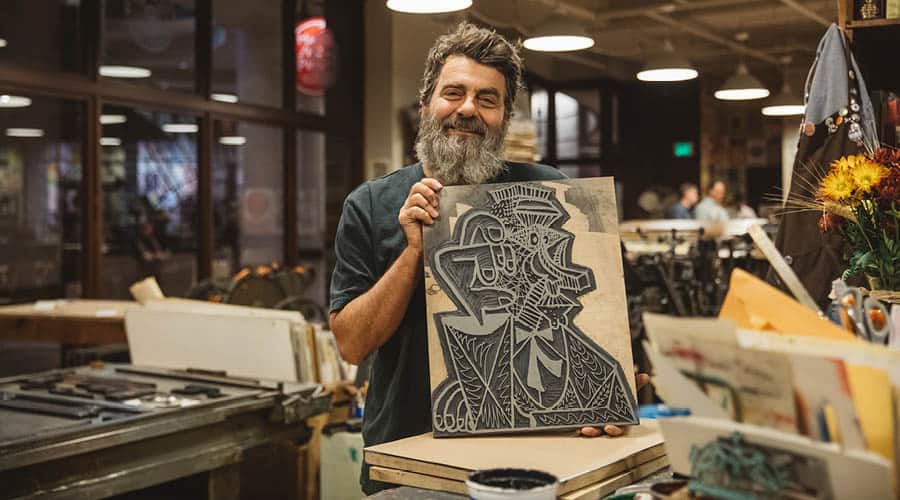 And the portraits are distinctly geometric, almost two-dimensional variations of the spectacularly overwhelming three-dimensional puppets that Wayne builds from simple materials – cardboard and hot glue – and then brings to life with a thorough and detailed application of paint.

Being back in his home state, and working in the place that helped so many of his musical heroes advertise their shows appears to have had quite an effect on Wayne* – upon his return home to California, he generated a group of watercolors and pen and ink illustrations of many of this city’s favorites, from Hank Williams to Patsy Cline. [*We imagine that the colorful podcast Cocaine & Rhinestones contributes a heavy dose of inspiration too.] These can be seen in the show too, now hanging in Hatch Show Print’s Haley Gallery, through November 15.

And if you can’t find us, there’s the second-largest George Jones puppet ever made to help you find your way!